Favorite Doctor Who from Series Seven

By maria.selke - November 23, 2013
The Best of Series Seven -
according to Maria and Sherry, at least!

(speak for yourself...I’m not in love...it’s just “like” :) (Hehehe)
Series Six post, where we celebrate a Gaiman episode


Series Seven - and we’re all caught up. (Well, except for the hundreds of hours of classic Who. I’m slowly working my way through those, too!) It’s time for me to begin discovering classic Who episodes since treadmill season is nigh!


We thought we’d lost them before - but here’s where we finally and permanently lose “the Ponds”. We see how Eleven handles loss, and we get our setup for the upcoming 50th anniversary.


Sherry - I didn’t connect after Rory & Amy left...Clara really just doesn’t fit for me. Each episode in the second half of the season was really “meh”...until The Name of the Doctor. Finally! Clara has a REASON! Souffle Girl!

I enjoyed the mystery of Clara, though I understand the many criticisms about how the past few seasons made the women into more “mystery” and less true companion in their own right. What I really liked, though, is the fact that my nine year old really likes her! Clara comes in right after Rose and Donna in his chart… BECAUSE of her mystery. Some of the episodes I like most from this series are the ones that get criticized the most. I guess I just don’t really care about plot holes. I just like to be entertained.


Dinosaurs on a Spaceship
All the “serious” reviewers seem to have detested it. I laughed myself silly through the whole thing. There are plenty of serious episodes. Plenty that advance the overall plot or reveal some deep truism about humanity. Sometimes you just want some juvenile humor and the chance to ride on a triceratops. Is that so much to ask?

Sherry - A light episode indeed, but the humor of this episode didn’t sit well with me.

The Power of Three
Sherry - I enjoyed the juxtaposition of the Pond’s “normal” life as compared to their craziness with the Doctor. I also loved Rory’s dad, Brian, as he watches and records “everything” the cube does. A kidnapping, a countdown, a rescue, and a return to traveling make this an excellent episode for me.

I didn't like this one the first time around, but enjoyed it more the next time I watched it. I think it was because I watched with my son - and he really liked it.

The Angels take Manhattan (sob!)
I loved the storytelling of this episode. The way it went back and forth between the hard-boiled style detective narrative and the action was so creative. I enjoyed the interaction between all the characters, especially the way that River is so insightful about the Doctor. Even though the criticisms about the paradox make me chuckle (really, if he can’t get to NYC, why can’t he land in Jersey and just take a cab to see them again?), the ending is heart-rending, beautiful, and just perfect. 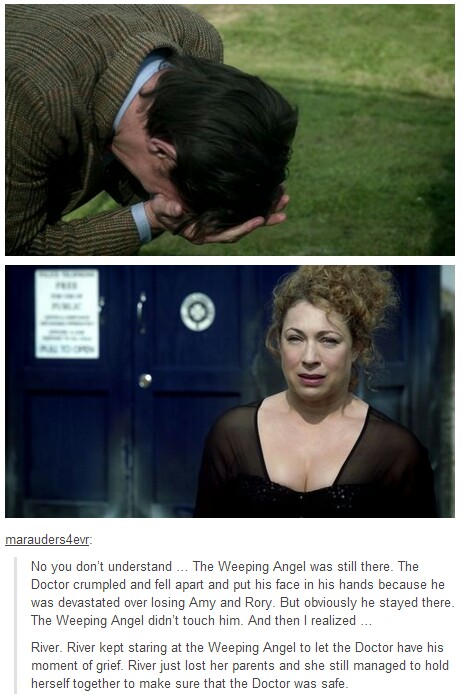 Sherry - I can’t even. All. The. Feels. I refuse to re-watch this episode because it completely breaks my heart. Sob.

This is what happens when the Doctor loses his beloved companions. I needed to see Eleven really wallow for just a little while, and know just how much he missed the Ponds. His guilt eats away at him, just as much as it did when he was Nine. Seeing him with those reading glasses - the ones Amy wore in Angels Take Manhattan - was a great touch. But what really makes me love this episode is the trio of Vastra, Jenny, and Strax. Is there any way we can get a spinoff with them, please?

Sherry - Fun fact: I actually watched this episode when it originally aired on Christmas night 2012. Why? I wasn’t current at that point but just couldn’t resist. It confused the heck out of me then, but when I watched it in sequence it certainly made much more sense. Just like books, I really am a stickler for watching the episodes in order so every detail “clicks”.

The Name of the Doctor --

Sherry - This episode makes up for the 2nd half of season 7. I’m adored Clara’s role as The Impossible Girl! Also, the final conversation between River & the Doctor (or was it?)

I agree - I thought the way that everything came together was wonderful! All the little itches about Clara were finally scratched. I sincerely hope it isn’t the end of our time with River Song!

Of course, I was also just a bit annoyed that we have SO LONG TO WAIT until the next new episode…. and I didn’t get caught up until June!

Sherry - Same here! I delayed finishing up Season 7 because I didn’t want to wait so long, but I watched this episode the same day Doctor Twelve was revealed. It seemed like perfect timing!

But now… the wait is over…


It’s here… today is the big day… what will we think of the 50th anniversary special?? Will it live up to all the expectations? I won’t get to watch it live with the rest of the planet, since I’ll be at my son’s robotics event.


Sherry - My daughter has already announced we’ll be watching it live at 2:50 and then again at 7 that evening. It will take watching it twice to begin to fully appreciate it, I’m sure.


I’ll go social media dark until I can get home and watch it with no “Spoilers, Sweetie”. See you on the other side!