Favorite Doctor Who from Series Six

The Best of Series Six -
according to Maria and Sherry, at least!


We were almost “out of luck” as we tried to get this post ready. Sherry lost power in a big storm, and we were having trouble figuring out how we’d get our thoughts together! Thankfully, the Doctor must have swung by her neighborhood to get the power rolling again. Whew!

Written by Neil Gaiman? That by itself was enough to convince me that I was going to love it. The TARDIS has a mind of her own. SHE stole a Time Lord. The scene at the very end, where she and the Doctor are sharing their final words… I still shiver when I think about it. I’ll be writing a “Top Ten” list from all the seasons and I’m pretty sure this one will make the cut.

Sherry - Neil Gaiman completely outdid himself with the characters of Nephew, Auntie, Uncle, and Idris. This episode is eerie, weird, and completely fabulous. Finding out that the TARDIS not only has a mind of her own, but a soul? Smart AND sexy? Don’t forget the sense of humor! “Oh my beautiful idiot, you have what you’ve always had...you’ve got me.”


A Good Man Goes to War

Eleven spends so much time prancing around in a variety of silly hats and pulling on his bowtie that sometimes we forget he is an intense, powerful, TIMELORD. This episode brings home that message with a bang and a roar. Now that we’ve seen the hints of the Time War… and the Good Man (Eight) going to war (becoming the War Doctor), this episode is even more powerful. Gotta admit that I adore Madame Vastra, Jenny, and Strax too.

Sherry - My favorite parts of this episode come at the end with the heated exchange between the Doctor and River Song, followed by the whispering. When Amy goes after River with a gun and then the ultimate twist/reveal is made about who River Song really is...wowza.

My 9 year old insisted I add this one in. I do like it, especially the fact that Amy and Rory’s child found a way to grow up with them, becoming a part of their family in a completely unique way. It wouldn’t make my favorites list otherwise, though.


The Girl Who Waited

Sherry - It seems that I’m quite drawn to to sad episodes of Doctor Who. This one is no exception. I used to think “the girl who waited” referred to Amelia as a child but those 12 years were nothing compared to the 36 she waited in Apalapucia, driving herself practically crazy, bargaining to be rescued, meeting her younger self, and then ultimately dying so the younger Amy can have the greatest love story with Rory. (swoon) This episode definitely played on my emotions. 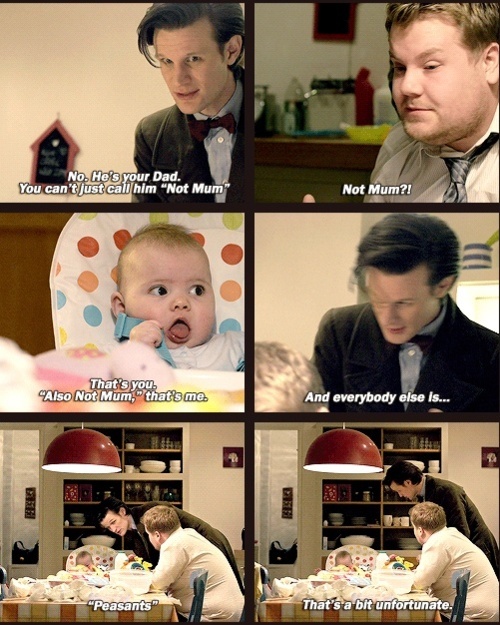 I probably quote this particular episode more than any other Eleven storyline. I absolutely love Smith in Closing Time, and the sequence with Stormageddon is simply divine. The humor contrasts perfectly with the blue envelopes being filled out, and the dread we see on Smith’s face as he prepares to face the death we’ve known was coming since the start of this season.

Sherry - Another “classic” Matt Smith episode. Of course, he speaks baby...why wouldn’t he? The “just visiting” by the Doctor that turned into a full blown investigation including a job at a department store made for many giggles even as the dreaded Cybermen reappeared. The blue envelopes and Stetson aha moment from The Impossible Astronaut; I love how these episodes overlap and intertwine.


The Wedding of River Song

River is amazing. I love her big hair and her attitude of complete indifference to rules. She’s a scoundrel through and through. She’s devoted to the ones she loves, though, and we really see that here. We know the question that must not be asked.. getting us ready for the next season. “Doctor WHO?”

Sherry - So many twists and turns in this episode...it’s still confusing to think about and try to explain! But there’s no doubt this is one of the most important episodes because of the questions that are answered and explained. Bottom line: River Song kicks butt and we all want to be her: the Doctor’s wife.

Don't miss the mini episodes that went along with this season!


This post is part of TWO marvelous blogging events!