Favorite Doctor Who from Series One

The Best of Series One -
according to Maria and Sherry, at least!


As part of my Doctor Who Week extravaganza, I invited my friend Sherry (aka @libraryfanatic) to chat with me about our favorite episodes from each year since Doctor Who restarted in 2005. My thoughts will be in regular text and Sherry’s in italics. Enjoy!


Series One - this is where it all began for me. I am late to the Whovian Nation. This earns me a slightly derisive grin from my husband, who is a Classic Who fan. I don’t care. Late is better than never, right?


Sherry - I too am a late comer to the Doctor Who fandom. The show had been recommended to me many times by devoted student fans and even by my own nephew, but I always waved off the notion that I would actually like it. Then for some reason I finally decided to give it a try while on the treadmill. I became hooked almost immediately. The sign of a really great show for me is when I want to keep running so I can watch more! Doctor Who definitely fit this category for me.

Christopher Eccleston is “my” Doctor. Everyone says you never forget your first, and this is completely true for me. I had a hard time choosing favorite episodes for this series year, because each one spoke to me in a slightly different way.

Sherry - I really thought Christopher was “my doctor” too. I bemoaned his regeneration into David Tennant. In fact, at the end of Christopher’s season, I had to take a full week to mourn his passing. I just knew that Doctor 10 could not compare. But I was wrong... I love Christopher Eccleston for introducing me to Doctor Who and for making me become a Whovian, but he is not “my” Doctor.


Now that I have seen all of the current series (from 2005 to today), I can see in this year the hints of what was to come. Humor, romance, horror, and science fiction all rolled into one television series that sucks you in and creates new Whovians. Some hooked on me the character of the Doctor. Some had me giggling along with my boys as they met his odd cast of villains and friends. Others introduced me to the weeping in the corner I’d do a decent amount of along the way.

The End of the World --
Sherry - This is an episode that I think back to fondly because of all the interesting characters we meet who come into play later on during the series.

I have to agree with that idea, even though I wouldn’t put it on the list as one of my all time favorites. I do think it gave us a great insight into Rose, though. I blogged about the first few episodes of the series (before I got so completely sucked in that I couldn’t be bothered to stop to take notes and write about them!) I wrote about The End of the World, and had some pretty deep things to say about it…

Unquiet Dead
This one WOULD rank pretty high on my overall favorites list. I wrote a full post about it and began with the sentences..

“Snared by the first episode.
Engrossed by the second.
The third? The third episode sold me on the relationship between Rose and Nine AND convinced me that I would watch them go anywhere - do anything - together.”


The looks that Nine gave Rose? Adorable, enchanting, tantalizing, and heartbreaking all at once.

Sherry - One of my favorites because of the base humor. Yes, others say the fart noises were a bit much, but really, who doesn’t laugh at a good fart noise/joke? My kids and I laughed and laughed through this episode. The best part? Harriet Jones. Love her!

This is another set of episodes that would never make an overall Top Ten list for me, but hearing my sons giggle like lunatics at each fart made me like it a lot more. Harriet Jones did seriously rock. I wrote about this double episode, including World War 3. 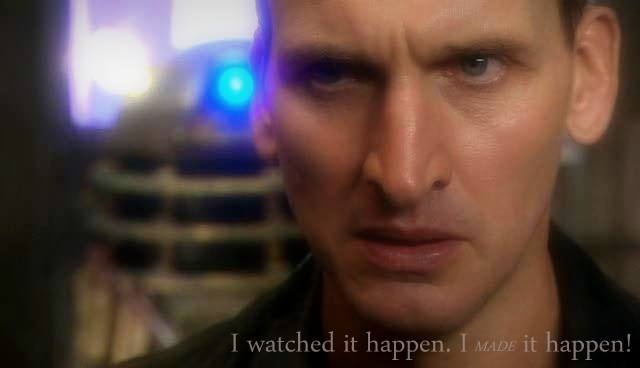 Anger leads to hate…. wait.. that’s the wrong fandom. Still, Dalek is a perfect example of how this Star Wars mantra is true. It is Rose that saves the Doctor this time (again). She is a shining example of humanity, which is just what the Doctor needs to help mend his wounded soul. Read the rest of my thoughts about this episode…

This was the first time Doctor Who made me cry. I’ll love it forever for that. My sons had a totally different reaction - they thought the reapers were incredibly cool and loved the intensity of the action as the Doctor rushed around trying to save the world. This just illustrates one of my points, though. Doctor Who has something for everyone. I wrote a ton of notes about this one, but never did get a full post written about it.

Classic. Dark - horror - but always with a tinge of light. The humor of Captain Jack was the perfect bit of levity to toss into such a creepy plotline. The little bit of jealousy we saw from Nine? That didn’t hurt either. This will also forever be the episode I remember every time I eat a banana.

Parting of the Ways

Self sacrifice, love... I’m clearly more into the romance of science fiction than I would have believed before beginning this Doctor Who journey. I claimed to be a “hard core” science fiction fan, but my love for this pair proves the lie. (okay, who am I kidding - I “shipped” Han and Leia from the start too).

Sherry - I am a huge fan of the underlying romance in Doctor Who and this episode nearly broke my heart. I definitely cried when the Doctor sacrificed himself to save Rose. True love...


***
Well… I’m not sure if that actually works as a “best of” post, since we talked about almost every single episode! See, Sherry? Nine is awesome! Never fear, I have plenty of love for my darling Tennant as well, and we’ll have THREE days to talk about him!