Showing posts from June, 2014
Show all

(http://doctorwhogifs.tumblr.com/)  Yeah.... it's been a while. Totally my bad. I got in a slump (though I have been reading) and I haven't been posting to my blog hardly at all.  Since my last It's Monday post was over a month ago, I am certainly NOT going to try to cover everything I have read in the past six weeks. I love you all too much to do that to you. I'll just snag a few of my favorites and call it a week. This non fiction picture book biography is delightful. It comes out in October, so I will do a full review closer to publication. Put it on your list... you want it. I'm guessing this is already on the radar (or already read) for most of you... but definitely make sure you get the grand finale of the Silver Jaguar series. Perfect for younger middle grade readers. They will eat it up! Pardon the mess.... An amazing selection of nonfiction picture books. My favorites in this pile were The Noisy Paint Box , Handle with Care , Fea
Post a Comment
Read more

I am devilishly excited to host the very first stop of the Minion Blog Tour!  I promise it had nothing to do with the fact that I'm a secret super villain, bent on world domination myself. There was no blackmail involved. There are no sharks with lasers on their heads. There is no moon sized weapon of mass destruction aimed at said author's abode. There's just a teacher - a reader - who loves books about super powered kids. Yeah... that's it.  So come along and check out a fabulous vlog by Anderson, where he reveals HIS secret plans for world domination. What will he demand? Will he be successful? Will you win a copy of this amazing book by entering my giveaway?  (Also check out my review of the first book - Sidekicked - and Anderson's humorous stop on that blog tour !)  MINION  by John David Anderson Published by Walden Pond Press June 24, 2014 ISBN-13: 978-0062133113 ABOUT MINION John David Anderson returns to the world of superhero
Post a Comment
Read more

Review - The Pilot and the Little Prince NFPB2014 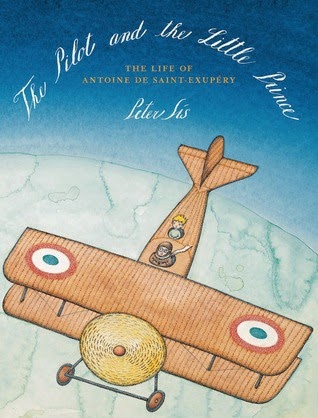 Time for another dive into nonfiction picture books! With the proliferation of amazing picture book biographies over the past few years, it can be hard to really stand out of the crowd. This title, though, is something truly special. The Pilot and the Little Prince: The Life of Antoine de Saint-Exupéry by   Peter Sís Hardcover, 48 pages Published May 27th 2014 by Farrar, Straus and Giroux (BYR) ISBN  0374380694 (ISBN13: 9780374380694) Source: ARC from publisher From Goodreads : Antoine de Saint-Exupéry was born in France in 1900, when airplanes were just being invented. Antoine dreamed of flying and grew up to be a pilot—and that was when his adventures began. He found a job delivering mail by plane, which had never been done before. He and his fellow pilots traveled to faraway places and discovered new ways of getting from one place to the next. Antoine flew over mountains and deserts. He battled winds and storms. He tried to break aviation records, and sometimes he ev
Post a Comment
Read more
More posts