Favorite Doctor Who from Series Five

The Best of Series Five -
according to Maria and Sherry, at least!

Each season brings new twists, new turns, new companions, and odd sartorial choices. I found it took me longer to get used to Matt Smith’s Doctor, but I came to enjoy his goofy energy. I even dressed up as the Eleventh Doctor this Halloween.

Sherry - I think I tend to like Matt Smith in that crazy little brother type of way. Yes, he’s goofy and unpredictable, but he’s also adorable and funny. You just want to ruffle his floppy hair and pat him on the head... but then you remember Nine and Ten are both still a part of him and of course you’d never treat them in such a manner! That wouldn’t be fitting for the last Time Lord!

I didn’t believe anyone could fill the adorable Tennant’s shoes... Smith is so different, but this episode cracked me up and helped me make the transition. My boys loved it too!. We even made “fish fingers and custard” as a special Whovian treat. Watching him try all those foods and spit them out still makes me giggle.


Sherry - Yes, Eleven is indeed quite different from Ten. His debut episode is endearing, but I was even more intrigued by Amelia/Amy Pond. Great story about the 12 year wait and the cracks in the universe...but Smith is no David Tennant...and definitely not “my Doctor”! However, this episode introduces my all-time favorite companions: Amy & Rory.

What is real? What is the dream? And oh, how sad is it to really, fully understand just how much anger the Doctor has for himself. I also like that Amy seems to actually figure out where her heart lies. Amy and Rory are a great couple, and the Doctor should never come between them - even just in Amy’s mind.

Sherry - Another sad episode as the alternate/dream world wars with the seemingly real one for Amy as she is forced to make a choice between Rory and the Doctor. I’m glad this episode clears everything up because it never truly felt like a love triangle to me. Instead, this episode made me feel so badly for the Doctor and his loathing for himself.

Vincent and the Doctor

When I talk to other Whovians, this episode always ends up on favorite lists. At the start of the episode, I liked it but wasn’t captivated. By the end, though? I adored it. It fits right in with the overall theme of the Doctor - helping each person understand just how important they are. The little insights into an artist’s mind and vision were also fascinating.
http://keepcalmandlovetennant.tumblr.com/

This episode makes my all time top 10 list. Why? I’ve always been a Vincent Van Gogh fan. This episode allowed me to “meet” him and see a bit into his troubled mind and life. I loved the casting of Tony Curran as Vincent. It is another bittersweet episode as we see Vincent travel to the present and the exhibit of his work, but then see nothing really changes with the end of his life. It’s one of the few episodes I actually remember the ending music: Chances by Athlete. Such sad lyrics for a poignant episode.

We see Smith as a powerful, intense Doctor with the Pandorica. Since he often acts so goofy, it’s a great change of pace to see this side of him. I like to think that it’s his Nine surfacing. It’s also a nice showcase for Rory. I love that man.

Sherry - Rory definitely comes into his own and stops being just a sidekick. Other favorites: River Song as Cleopatra, the exploding TARDIS painting by Vincent Van Gogh (seen in several episodes), the engagement ring... so much to digest in this episode! 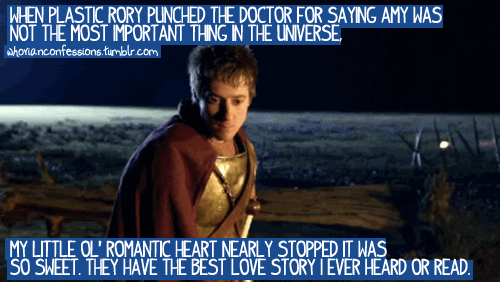 The fez. Yes, the fez. I don’t know whose genius idea it was to put Matt Smith in a fez, but they deserve a medal. You know who else deserves a medal? The writer who thought that Amy and River should shoot it into oblivion. Perfect.

Sherry - So much more to this episode beyond the marvelous fez! Filled with twists and turns in every direction as time is crossed and rebooted, cracks in the universe being fixed, a wedding, and something Blue. Yes, this too would make my all time favorite list of episodes.


Come on - join in! What are your favorite episodes?