Welcome back to Sci Friday - a celebration of science and science fiction!

Today I'm excited to share a seriously Sci Fi Picture book. There aren't a ton that fit this mold, though I have blogged about picture books that could be used to teach about the genre characteristics before. 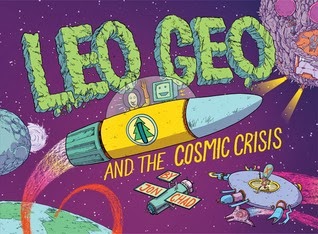 Source: I received an ARC of this picture book from the publisher

Goodreads Summary: Armed with his knowledge of science, Leo Geo becomes an astronaut and heads into space, where he encounters pirates and tries to stop a comet that is headed toward his brother's science laboratory on Earth.

My Thoughts:
This is a picture book with seriously silly quirks, some of which need to be explained to children so they can fully enjoy the story. You see, it is actually TWO books in one. Once you get to the middle of the book, you flip it over and read from the other side. There are also pages that need to be held vertically, which means you have to have a solid idea of how to decide which way to read a page.

Leo Geo is filled with a wide mix of space facts and goofy images. It's jammed packed with little drawings, to be honest. In that, it will appeal to students who like to sit and stare at books like Where's Waldo or Hidden Image style books.

The space information isn't just basic facts about stars and planets. Leo Geo gets into black holes, singularities, and white dwarf stars. This means that students really need to have a solid foundation of science before they can truly appreciate what Leo has to offer.

I "taste tested" the book with a second grader who is researching space facts. As I suspected, it was definitely hard for him. I had to show him the "tricks" of the book, and his background knowledge wasn't yet strong enough to help him make his way through the text. BUT - after paging through the book once in confusion - he went back to the book several times to examine all the little pictures. He giggled and declared "he has a dog that's really smart!". In his words:

"First it was really hard to understand it. I thought there was only one side (this is when I had to show him how to turn the book). I saw the bad guys in this book. I liked the art in it. It was pretty good." - 2nd grader perspective

I also "taste tested" the book with my own son, who is in fourth grade. He's science savvy, and told me that he had no problem with the science content. He enjoyed the silly pictures, and started pointing to some of his favorites when I asked him to give me his opinions. Even though he didn't have a problem with the formatting, he did mention that he didn't like having to flip the book for the other story.

The bottom line: Leo Geo and the Cosmic Crisis was a lot of fun, but there is a very specific audience of students who will truly appreciate it. These kids will be science savvy - probably already knowing a good amount of astronomy and space science. They will need to be strong readers, as many of the worlds are large and the pictures can't really help them figure out the words themselves.

Science Topics Covered: This is definitely an Astronomy specific book.

Gender Ratio: The story is about two brothers. There are no girls in the book that I could detect (other than his dog).

Check out my MANY other reviews of science and science fiction books for children, young adults, and even some adult books!
http://www.mariaselke.com/search/label/SciFriday

For students who are a "good fit" for this picture book... I think they will consider it...