By maria.selke - November 02, 2012
Hey, someone got a little Picture Book in my Sci Friday!

This week’s quest to find picture books that highlight the main science fiction genre traits was handed to me by the Lady in the Lake.  Umm… wait…. actually... it was Kellee Moye. When she blogged about how she introduces genres in her classroom, she mentioned that she didn’t feel Zathura was the best choice for science fiction. I decided to take the question to my local librarians to see what they could suggest.
My librarian friends have often told me how much they love being consulted for ideas. So it was not surprising to see the faces of the two children’s librarians light up when I asked my question.  One scurried off to the shelves, while the other tapped the keyboard and tossed out titles. In the end, I walked out with five picture books. While there are numerous sub-genres in science fiction, I applied a very basic lens to these books.
Science fiction:
-          Tells stories that center around science and/or technology.
-          Involves scientific laws that extend into the future – with ideas that are plausible based on current knowledge and/ or project a new set of laws.
-          Explanations involve science, not magic.
-          Settings can include future (near or far), space, and other dimensions
-          Explores the “what ifs” that extend that science and technology, often examining the ethical implications.

(Goodreads summary) Professor Xargle explains to a class of extraterrestrials how various members of families behave.

What I think:
Science Fiction Traits: The story is told from the point of view of an alien, discussing human relationships.  Most of the pictures show families interacting, though the alien teacher pops up. The setting alternates between earth and the alien world. There is minimal technology and science in the story.
Other Thoughts: For a book that was written in the early 90s, there seemed to be an awful lot of sexist generalizations. I wasn’t a huge fan of the illustrations, either. On the plus side, it might be an interesting introduction to sophisticated science fiction ideas about how humanity misinterprets the behavior and motivations of alien species at first encounter. Overall, though, I wasn’t very excited by this book. (Goodreadssummary) No need to knock, just step right in. You're just in time to two-step with Grandfather Robinson and his dancing frog band. Cousin Laszlo is demonstrating his new antigravity device. And Uncle Art's flying saucer is parked out back. It seems like all the Robinson relatives are here, so be prepared. And keep your head down...Uncle Gaston is testing out the family cannon.

What I think:
Science Fiction Traits: The story seems to be set in the present – or possibly the near future. The family members are inventors, scientists, and astronauts. The inventions and technology included anti-gravity devices, spaceships, and robots. All the science was in the background of the story, though, as the main part of the tale is focused on the boys finding grandpa’s teeth.

Other Thoughts: This is the picture book that launched “Meet the Robinsons”. I adore that movie, but the book wasn’t nearly as good. Honestly, there were no women in the book that did anything scientific at all? The science in the story was very peripheral, too. I’d rather show a segment of the movie to illustrate the genre traits. 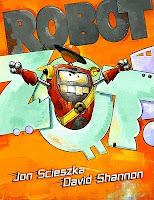 (GoodreadsSummary) … a tale of a quixotic robot determined to conquer the earth. The only problem is that the earth he lands on is a suburban kitchen and he is three inches tall. Robot Zot, the fearless and unstoppable warrior, leaves a trail of destruction as he encounters blenders, toasters, and televisions. But when he discovers the princess...a pink cell phone...his mission takes a new course. Robot Zot must learn how to be a hero - in the name of true love.

What I think:
Science Fiction Traits: The story is set in the present or near future, with an alien robot that comes to attack earth. Most of the story, though, is set in a modern kitchen with standard appliances and toys. There is no real emphasis on technology, and only a minor focus on the spaceship that Zot travels in.

Other Thoughts:  This book is absolutely adorable. The art and text are great. I loved the moment when I realized that Zot is so incredibly small compared to the world he is trying to conquer, and I loved all the illustrations that showed it. 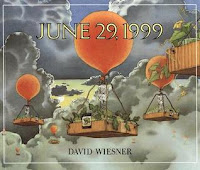 (Goodreads Summary) The lively imagination of Caldecott medalist David Wiesner forecasts astounding goings-on for a Tuesday in the not too distant future -- an occurrence of gigantic vegetal proportions.


What I think:
Science Fiction Traits: The story is set in the present(ish). The book was published in 1992. It features the scientific method, with Holly Evans setting up a science project to launch seedlings using a weather balloon. It’s clear she has done a lot of research, and is ready to collect detailed information on her results. The enormous vegetables that return to earth several weeks later at first seem like fantasy instead of science. Yet the aliens we see on their spaceship at the end bring it all back into the realm of science and technology.

Other Thoughts:  Can I admit that seeing Holly right at the start of this book immediately made me love it? The illustrations and lovely language in this book also appealed to me. Even if this isn’t the book you choose to teach science fiction genre traits, it should definitely be in your library! 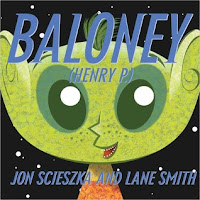 (Goodreads summary) Henry is an alien schoolkid who needs to come up with one very good excuse to explain why he is late for szkola, again. Otherwise, his teacher Miss Bugscuffle promises, it's Permanent Lifelong Detention.

What I think:
Science Fiction Traits: The story is told on an alien world, by an alien child. There is advanced technology (along with some simpler pieces!). There are planets up in the sky, rockets that fly, constellations, and scientific laws.
Other Thoughts: This is a fun book, entertaining and humorous. While the number of unknown words in the text may feel overwhelming, this would be a great way to teach kids how to make inferences about unknown words from context. So many times students give up on science fiction book because the first few chapters have so many new terms. Explicitly teaching how to handle this problem would be a huge step toward helping students have success with science fiction.  (As is true in many science fiction novels, there is a glossary in the back - another great lesson opportunity!)

The Final Verdict:
Hmm… can I make the call here? Kellee tells me I still need to get my hands on Boy + Bot. I wish I’d thought of that when I was at the library grabbing this book set!  Best bet from this bunch, though, would have to be Baloney for teaching science fiction genre traits.