It's Monday May 21st 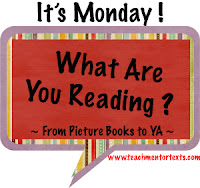 Yes, I missed posting last week. So that means this week will have double the fun! I’ll cut down on the extra chatter so that it doesn’t end up so long that no one reads the post. (Okay, there is still a lot of chatter. Sorry about that!)

Holes (audio). I didn’t enjoy it as much as I remembered loving it the first time around. I was just appalled by the way the adults treated the kids. It was still a great one, though.

Invincible Louisa – Colby Sharp adored this one, but I just thought it was good. I did like to hear about Louisa, since I grew up loving Little Women. I was even Amy in a play production in high school!

Kira-Kira (audio) – Enjoyed, but not overly passionate about. I’m a little over halfway done as I type this (though I’ll likely finish in time to post on Monday) and I’m watching the impending doom loom over little Katie. I don’t mind crying during a book sometimes, and sometimes it annoys me. I have yet to decide which this one will be.  --- Okay, finished. It was sweet, but I wouldn’t put it on any favorites list. I’m still trying to decide why.

Dobry (1935) This one is sweet and light, and I’m enjoying it. Yet I don’t really feel “award winner” as I read it. Okay, I’m done. Without spoilers, I guess I can say I expected more. I kept waiting for something “big” to happen, or someone to die or something!

Caddie Woodlawn (1936) I really enjoyed this one! Yes, I know there were problems with the way the Native Americans were portrayed – especially the “poor little half-bloods”. Those parts did indeed make me cringe. The rest of it, though, I found endearing. I liked Caddie, and her family, and enjoyed her discoveries about growing up and womanhood. For a book written in the 30s, I thought it had a fairly progressive view of the role of women. Yes, they were meant to be the homemakers, but her father’s discussion with her about the importance of women was touching. Clearly, too, he didn’t ever expect her to be a “typical” pioneer wife.

Poetry:
Forgive me, I Meant to do it. Gail Carson Levine.  (I won this copy from the publisher through a Twitter contest!) This was VERY funny! A great mentor text, modeling this poem style. It would be a fun way to get kids to write poems, and could even be used to tie into social studies or other novels or stories that they read. Definitely grab this one.

Sandman volume 1. I adore Gaiman, and this is a great start to a series. I’m pretty sure I read at least some of it in college, but I just had to go back and pick it up from the start.

Smallville Season 11 – I didn’t watch the television show (though it on my list of shows I’d like to grab and marathon at some point) but I decided to check out the comic series. I’m enjoying it so far J

Batgirl #9 – This would probably be a series that is YA, not just high school and up. I adore the writer (Gail Simone) and the art is impeccable. Batgirl is part of the crossover event “Court of Owls”, so I need to figure out how many of the other comics that are part of the even that I plan to grab.

Buffy #9 – I review Buffy for the Fandom Post site, and this was one of the best issues of this season. Great writing, great character interactions, and awesome pacing.

Lunch Lady and the Field Trip Fiasco (#6) – I won this one from Mr. Schu and it was signed! My younger son loves these. I like them, but Dee is so irritating!

Lunch Lady and the Mutant Mathletes (#7) – started out annoyed on this one (joining the mathletes should NOT be a punishment!) but ended up enjoying it. Of course, the crew learns that math can be fun, right?

A World Without Heroes – Kathy and I decided to call it quits on this one. We wrote up our first two discussions, and they are on our blogs. Neither of us were enjoying it much (Kathy actively hated it!), so we are moving on. We did create a post to discuss when we abandon books, do it wasn’t all a loss!

Dragon Castle – Bruchac. Kathy and I are just beginning this one. Check out our thoughts on the first chunk of the book at the end of this week.

Literary Critique? Not sure on the category for this one.

Joss Whedon: The Complete Companion. I got a review copy of this book as part of my work with the Fandom Post. It’s a collection of essays about all kinds of topics related to his work on Buffy, Angel, Dollhouse, Firefly, X-Men comics, and more. I’ve only read a few of the essays so far.
Comics Fantasy Graphic Novels It's Monday Nerdbery Newbery