Blog Tour for The In-Between by Rebecca KS Ansari

Welcome to this stop of the Blog Tour for The In-Between by Rebecca K. S. Ansari!

First, let's take a look at the book synopsis from the publisher: 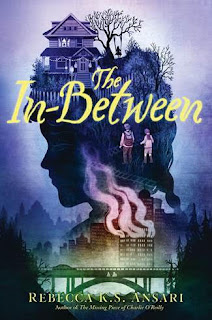 A dark, twisty adventure about the forgotten among us and what it means to be seen, from the acclaimed author of The Missing Piece of Charlie O’Reilly.

Cooper is lost. Ever since his father left their family three years ago, he has become distant from his friends, constantly annoyed by his little sister, Jess, and completely fed up with the pale, creepy rich girl who moved in next door and won’t stop staring at him. So when Cooper learns of an unsolved mystery his sister has discovered online, he welcomes the distraction.

It’s the tale of a deadly train crash that occurred a hundred years ago, in which one young boy among the dead was never identified. The only distinguishing mark on him was a strange insignia on his suit coat, a symbol no one had seen before or since. Jess is fascinated by the mystery of the unknown child— because she’s seen the insignia. It’s the symbol of the jacket of the girl next door.

As they uncover more information— and mounting evidence of the girl’s seemingly impossible connection to the tragedy—Cooper and Jess begin to wonder if a similar disaster could be heading to their hometown.

My Thoughts:
I mean - is it any wonder that I jumped on the opportunity to snag an advance copy of this book and share my thoughts with you?
I've discovered that one of my favorite types of novels, for any age group, are those that weave a realistic setting with something "otherworldly". The In-Between definitely fits that bill.
The realistic part of the story is filled with heart and empathy. Cooper's anger and detachment from his old friends feels deeply true. When you go through something as challenging as he has, with his complete loss of his father to his "new family", it can be almost impossible to face the people who knew you before. Ansari does a good job showing that this disconnect wasn't really anyone's fault. His old best friend keeps reaching out gently, but Cooper just isn't ready yet. When a new student, Gus, shows up on the bus, I felt so happy for Cooper to have that opportunity to make a new connection. In this way, the emotional heart of the story reminded me a lot of My Jasper June, by Laurel Snyder. (Which I also loved!)
Cooper's mother and sister are deftly written and understandable. The normal sibling conflict between Cooper and his sister, Jess, is made more challenging by their parents' divorce and Jess' recent diabetes diagnosis. While we don't really learn what happened to make their father abandon them, it was refreshing to see the message reinforced that sometimes the best thing for our own mental health can be to let people go. Cooper's mom is hard-working and needs to rely on Cooper to help support his sister. I loved how all of those things are just part of the fabric of their lives. Jess and Cooper's bond strengthens as they work to uncover more information about the mysterious deaths that Jess discovered. Sometimes an "annoying little sister" can become a valued friend. 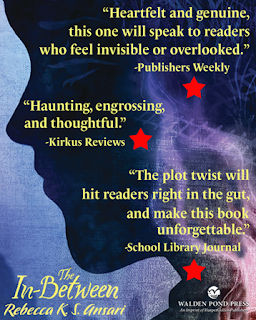 I'd love to share more about what I enjoyed about the mysterious and otherworldly elements, but I don't want to spoil anything for you! The girl next door is tied to the title of the novel, and the concept of the "In-Between" was deliciously spooky and intriguing. I was emotionally connected to Jess, Cooper, and Gus enough to feel genuine anxiety as they faced their final challenges. The ending felt satisfying, hopeful, and true. Those things, to me, are the true measure whether or not I've connected with the story.
Don't just take my word for it! The quotes of praise you see here definitely reflect my feelings about The In-Between.
About the Author:
Rebecca lives in a very loud house in Minneapolis with her husband, four boys, and her seriously massive pets. After twelve years as an ER doctor, she shed her scrubs to write magical and mysterious worlds for middle-grade readers. She is drawn to any story that evokes, "Please, Mom! Just one more chapter!" and she strives to craft the same. Rebecca was the winner of the Minnesota SCBWI Mentorship for 2015. When she isn't writing, you can find her biking, cooking or escaping "up north" with family, friends, and a stack of good books.