Can you tell the truth from a lie?

We live in a world filled with increasingly hyped up news, clickbait headlines, and flat out lies dressed up to look like truth. Parents and teachers are desperate for any tools we can find to help us build critical thinking skills and media literacy. 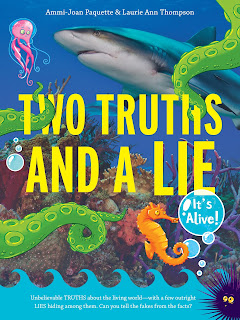 Two Truths and a Lie is the first book in a fascinating new series that presents some of the most crazy-but-true stories about the living world as well as a handful of stories that are too crazy to be true—and asks readers to separate facts from the fakes!

Did you know that there is a fungus that can control the mind of an ant and make it do its bidding? Would you believe there is such a thing as a corpse flower—a ten-foot-tall plant with a blossom that smells like a zombie? How about a species of octopus that doesn’t live in water but rather lurks in trees in the Pacific Northwest?

Every story in this book is strange and astounding. But not all of them are real. Just like the old game in this book’s title, two out of every three stories are completely true and one is an outright lie. Can you guess which? It’s not going to be easy. Some false stories are based on truth, and some of the true stories are just plain unbelievable. And they’re all accompanied by dozens of photos, maps, and illustrations. Amaze yourself and trick your friends as you sort out the fakes from the facts!

Acclaimed authors Ammi-Joan Paquette and Laurie Ann Thompson have teamed up to create a series of sneaky stories about the natural world designed to amaze, disgust, and occasionally bamboozle you.

Two Truths and a Lie: It's Alive! is a wonderful book to add to your media literacy arsenal. It is filled with fascinating truths (and lies) that will spark the imagination and curiosity in the readers. I especially like how several of the pieces bring up the ethical concerns that are associated with the stories, which could be a source of rich classroom discussion!

Students could easily read the book all at once, or they could read separate sections for discussion. Two Truths is split into three main parts: Plants, Animals, and Humans. Each of those parts has three chapters. (Three groups of three... it's a number nerd's dream, too!)

Following those sections is:
-- a research guide with suggestions for how the reader could go back and analyze the information in the text. All of that advice is applicable to any nonfiction piece they may read - which makes it a fabulous tool.
-- the answer guide. This part is well explained, but also quite humorous.
-- the bibliography. I love this part, and it factors into my strategy suggestions below.

Strategy Suggestions: There are several ways I think you could attack this text in a classroom setting. I'm planning to do each of them with different parts of the book.

1) Read, Reveal, Analyze
Have students read all three pieces in one chapter. Let them discuss which one they think is the lie. Then reveal the answer WITHOUT sharing the "answer guide" analysis. Have them go back through each piece, now that they know the answer, and look for the "tells". Give them the bibliography as well, so they can look at the names and types of sources used. This would lead to some great discussions about sources, quotes, etc.

2) Use step 1's analysis on the next set of passages
After you've done step 1 - try it again. I'd suggest having a classroom created "analysis" chart that reminds them about the types of information that tends to suggest a fictional piece. See if that first step's discussion helps them find the error with more accuracy.


I'm guessing you can come up with other ideas, too. I'd love to hear them!

Ammi-Joan Paquette has traveled to twenty-four countries, has the ability to wake herself up at a given time without an alarm clock, and once climbed Mt. Everest. (Not all of these are true!) Joan is the author of the novels Rules for Ghosting, Paradox, and Nowhere Girl, as well as the picture books Petey and Pru and the Hullabaloo, Ghost in the House, The Tiptoe Guide to Tracking Mermaids, and The Tiptoes Guide to Tracking Fairies. She lives outside Boston, Massachusetts, where she balances her own writing and her day job as a literary agent. You can visit her online at www.ajpaquette.com.

Laurie Ann Thompson has ridden a pig, gotten stuck in an elevator overnight, and jumped out of a perfectly good airplane. (One of these facts is not true; can you guess which?) She is the author of Be a Changemaker: How to Start Something That Matters, My Dog Is the Best, and Emmanuel's Dream, a picture book biography about Emmanuel Ofosu Yeboah, which was the recipient of the Schneider Family Book Award and was named an ALA Notable Book, a CCBC Choice, and a Bank Street College Best Book of the Year, among dozens of other accolades. She lives outside Seattle with her family. You can visit her online at www.lauriethompson.com.

Visit the other stops on the blog tour!


Disclaimer: I received a copy of this book from the publisher in exchange for my honest thoughts.
Critical Thinking Media Literacy Middle Grades NonFiction