I am continuing to share my experiences from Confratute! The first paragraph is the blurb I wrote for the newsletter. Below that is more detail from the amazing evening at the UConn bookstore.. Huge thanks also to Susannah Richards (@sussingoutbooks on Twitter and Instagram) for organizing this event.


Karen Romano Young visited Confratute on Monday to share some thoughts on writing for children and young adults. Her career began in teaching, but she realized that it wasn’t right for her very quickly when a few students played a prank in the school bathroom. Instead of being upset by this, Karen was amused by their creative genius. Her next stop was writing nonfiction for Scholastic News. This was perfect, because it allowed her to explore and write about the enormous variety of topics that interested her. Soon, she wanted to write longer work and began to write nonfiction books that mostly focused on science. Next, she branched into novels and using doodling in her writing. Her most recent works include an historical fiction novel called Sybil Ludington: Revolutionary War Rider under the pen name E. F. Abbott, Stuck in the Middle (of Middle School) a Novel in Doodles, and her upcoming novel Hundred Percent, which will be on the shelves August 2nd. 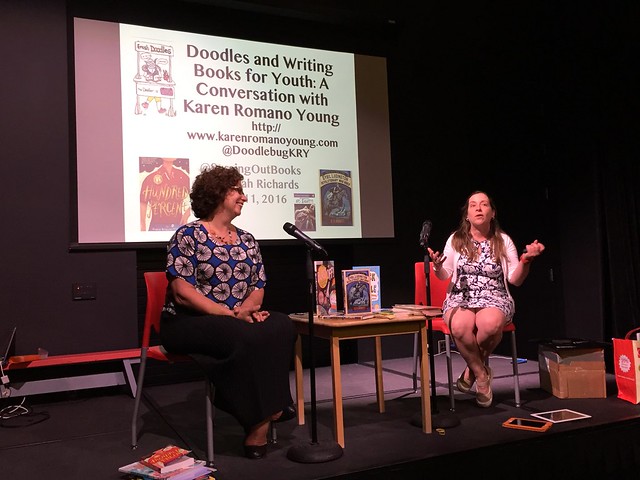 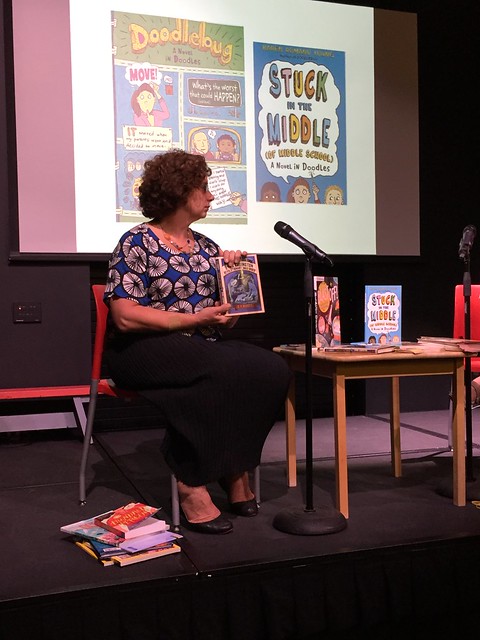 Here is some of the other information she shared that night:

Karen told us her doodling really got rolling after 9/11. She was struggling with her writing at this time, but needed a form of self-expression to help her reflect and work through the events.

Doodlebug was written in a month (May instead of Nanowrimo). It is a sketchbook with doodling and writing and how they interact in her head. Her more detailed drawings were at places where she wasn't sure what happens next. Karen found that doodling was a strategy for her to help her keep her pen moving so that her ideas kept flowing. 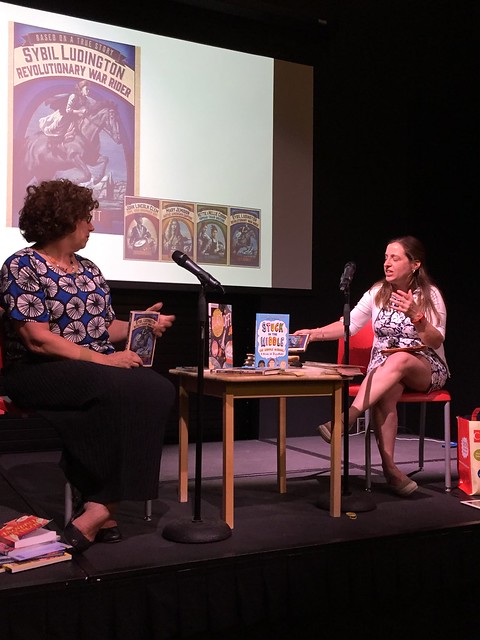 Sybil Ludington is part of an historical fiction series by E.F. Abbot - a pen name shared by several authors.

Karen is from the same town as Sybil Ludington, so she was excited to take on this challenge. Her children grew up seeing a statue of Sybil outside of their library. She told us about the fact that Sybil's story was kept quiet for 100 years. Karen took the bare bones of what facts we knew and discarded the things we know to be myths through tons of research, and then fashioned a story around those facts. She rode the path Sybil rode as she worked on the story. (But not on a horse!)


The Abbots are a bit of a club, and they hang out on social media. Karen told us that she would love to do another book. Learning about history through story and art brought it to life for her, and she hopes to do the same for her readers.

When was Karen captured by science? It definitely wasn't in school! It wasn't until 6th grade that she first had science in school, and she realized how "far behind" she was. As she was growing up, she lived in a natural area and spent time at the marsh all year and the beach all summer. Her grandfather was a doctor and loved science. He talked to her about anything and everything, and never talked down to her. These real world experiences shaped her scientific understanding. She had to talk school teachers into letting her into high level classes all along the way. She had confidence in her science knowledge and love. It was one of her 5 majors in college! 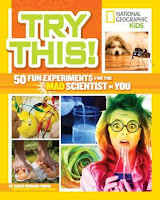 At Scholastic News she had to cover all kinds of topics. She realized the most interesting people to talk to were scientists. They were geeking out, and she loved them. When she starting writing books, she began with science. She got to go out on to sea and in the Alvin submersible.

Learn more about her projects at sea!

Karen uses art and comics to try to bring kids into science. "I can bring you 12 year olds - can you do that?" There are great examples of her Humanimal Doodles on her site as well.

Karen has also written science fair experiment books. She talked to scientists about what they are doing and then built science projects to get kids excited about those topics. In the Try This! book, she had kids really doing the science experiments as they were modeling for the photos. She said it was like running her own mini science camp! There is another Try This! in the works. 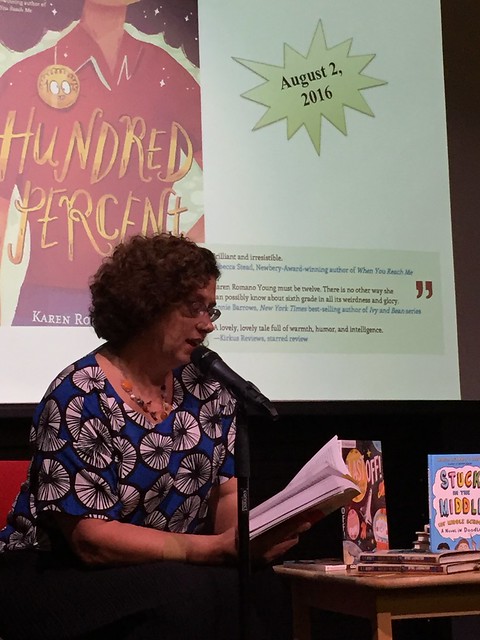 We got to hear an excerpt from her upcoming novel - Hundred Percent.

It is about being 12 years old. Many of the ideas came from real life. She drew on her student teaching, her life, and her own kids. Everyone was really awkward at this age. Karen tries to show how the events impact each of the kids. She started developing it as a short story set, and then it came together into one full story. She talked about using the "backpacks and bedrooms" strategy to help her understand and round out each character.

And - of course, we got books signed at the end of our evening! I snagged several of her titles at the bookstore and was thrilled to win an ARC of Hundred Percent. Be sure to learn more about Karen at her website - http://www.karenromanoyoung.com/ 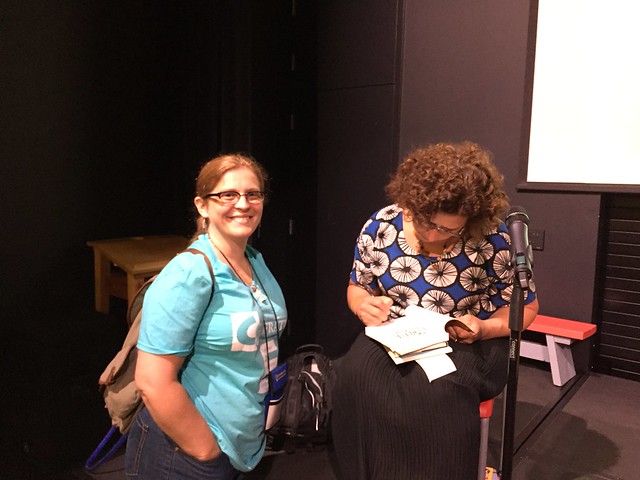 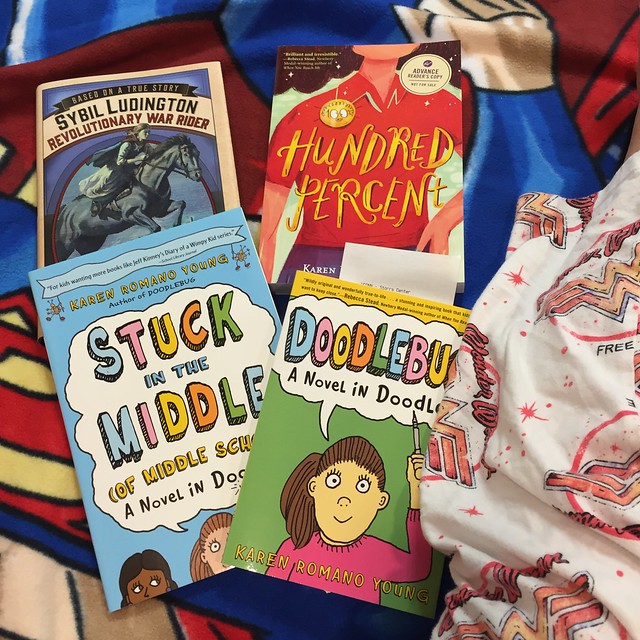