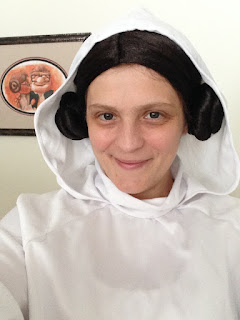 There’s nothing quite as satisfying as being able to incorporate the excitement over a major event in your fandom into high level learning tasks in my classroom. If you have ever read my blog or know me in person - you can probably guess what we used….

That’s right…. I have felt it. The Force is Awakening! My fifth grade reading group has been working on the Hero’s Journey this marking period. We watched the trailer and made predictions using the character archetypes we’ve learned.

We had already covered a lot of the standard archetypes from the Hero’s Journey framework, but I found a few more great ones on the Mythcreants site. I especially liked the addition of the “shapeshifter” category. We had talked about how sometimes characters change sides through the comparison of Warbeak from Redwall to Gollum in The Hobbit and The Lord of the Rings, so they already understood the idea of this archetype.


The final, official trailer for The Force Awakens had just enough detail to make it possible for us to make predictions about the roles some of the characters would play in the story. I find it tantalizing that we know so little for sure… and my students were also hooked by the mystery.

We watched the trailer twice (though all of them had already watched it multiple times at home with their families). The first time we just watched it the whole way through. On our second viewing, we stopped so they could ask about specific character names as they made their predictions. I didn’t require that they put names to every single archetype - and they were allowed to use names more than once. I answered questions that I knew definitively (like character names) and acknowledged their confusion about plot points. I certainly spent a lot of time saying, “that’s one of the theories I have heard!” I refused to share any of my opinions until they had recorded their ideas.

So - what did my students think? (There are 8 kids in this group)

Hero:
Finn - 3
Luke and Finn - 2 (they wrote both names)
Rey, Finn, or Luke - 1 (yes, this was his answer)
Rey - 1
blank - 1
Based just on the trailer, I can see students choosing Finn or Rey for this one. I was surprised, though, to see more kids include Luke as the hero (3)  than include Rey (2). Luke wasn’t even in the trailer! We did discuss that some people theorize that Luke is the man touching Artoo - so maybe that influenced their thinking.

Herald:
Leia - 1
blank - 3
“Man Finn and Rey saw in the reflection” (Han) - 1
Maz - 1
Han or “guy with gloved hand” - 1
Luke - 1
It wasn’t surprising that there were multiple “no guess” answers on this one. They had some trouble identifying the herald in the novel we read as well. I did mention that the voice at the beginning and the end has been identified as belonging to the woman playing Maz, but that we don’t yet know what she will look like. Clearly at least one of the students listened to me!


Trickster
Han - 1
Poe - 1
Captain Phasma - 1
blank - 5
This was an archetype we didn’t discuss in our novel, so clearly they weren’t really sure about this one. I bet they will find matches for this one when they watch the movie!

Shapeshifter
Hux - 1
Finn or Poe - 1
blank - 6
I almost didn’t include this one on our list, because it’s another archetype that didn’t make the cut when we discussed our novel. It seemed appropriate, though, based on the description on the Mythcreant site. They describe it as a character that changes loyalties - and I thought seeing Finn in a stormtrooper helmet that he removes would trigger that thought for them.

Guardian
Han - 3
“Gloved Guy” - 1
Poe - 1
Leia - 1
Rey or Leia - 1
I like that they definitely gravitated toward the “old school” characters for this archetype.

Shadow/Villain
Kylo Ren or Hux - 2
Kylo Ren or Phasma - 2
blank - 1
Kylo Ren - 3
This category seems much clearer. They had keen eyes for that red broadsword lightsaber!


Once they were done, I let them see my picks. Here’s what I think, based solely on the trailer(s) and my wishful thinking.

Can you feel it? Do you use exciting events in fandoms to spark student learning? I’d love to hear what you are doing in the comments!
Fandoms Geek Girls Star Wars