Have you ever wanted to run away from it all? Do you long for more adventure in your life? Have you ever dreamed of hopping on board a ship that is seeking buried treasure? Well, maybe you've never wanted to eat hard tack or climb a mast in a storm.. but you can experience the thrill of life on the high seas by reading the first book in this new series!

I adored Neversink, which came out in 2012, so I knew I wanted in on this new series by Wolverton. It did NOT disappoint. Action! Adventure! Gross vomiting scenes.... Okay, so that part made me feel more than a bit nauseated, but kids are going to eat it up. Yuck, poor choice of phrase there, right?

Classroom Ideas:
--Be sure to have lots of books of old maps on hand, or maybe some paper for kids to make their own.

--Partner this with other titles
- The True Confessions of Charlotte Doyle by Avi (most editions have great information on ship terminology in the back)
- The Glass Sentence by S. E. Grove has tons of fantasy maps. (this title is slightly harder than Vanishing Island)
- Tie into the gross factor with the "You Wouldn't Want to...." series.

Hang out with us and get a little insight into his inspiration for the Vanishing Island....

The Vanishing Island ... the summary

Does  the Vanishing Island really exist? And if so, what treasure—or terrible secret—was hidden by its disappearance? 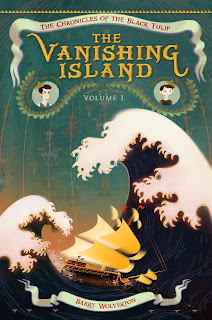 It’s 1599, the Age of Discovery in Europe. But for Bren Owen, growing up in the small town of Map on the coast of Britannia has meant anything but adventure. Enticed by the tales sailors have brought through Map’s port, and inspired by the arcane maps his father creates as a cartographer for the cruel and charismatic map mogul named Rand McNally, Bren is convinced that fame and fortune await him elsewhere. That is, until his repeated attempts to run away land him a punishment worse than death—cleaning up the town vomitorium.

It is there that Bren meets a dying sailor, who gives him a strange gift that hides a hidden message. Cracking the code could lead Bren to a fabled lost treasure that could change his life forever, and that of his widowed father. But to get there he will have to tie his fate to a mysterious Dutch admiral obsessed with a Chinese legend about an island that long ago disappeared from any map.

Before long, Bren is in greater danger than he ever imagined, and will need the help of an unusual friend named Mouse to survive. Barry Wolverton’s thrilling adventure spans oceans and cultures, brings together the folklore of East and West, and proves that fortune is always a double-edged sword.


"The Master of Maps" - by Barry Wolverton

I remember being surprised the first time I learned that Rand McNally wasn’t a real person, and that the company synonymous with road atlases wasn’t descended from some ancient family of mapmakers. So I decided all of that should be true. No offense to William Rand, the American-born printer, and Andrew McNally, the Irish immigrant, who formed Rand, McNally & Co. in 1868 in Chicago.

In my alternate history, where Britannia in 1599 is an upstart kingdom in the shadow of the Netherlands and the Iberian Empire, Rand McNally is a media mogul in the first great Information Age. The printing press is relatively new in Europe, as is the ability to sail great distances and discover new worlds. Those with the most reliable maps of the most lucrative trade routes can make a fortune, and McNally has cornered the market.

I picture McNally as something of a cross between Al Swearengen of Deadwood and Rupert Murdoch, with some of the marketing shrewdness of Steve Jobs. Among his regular sources of revenue are so-called authentic treasure maps, backed by the legal authority of the queen, sort of like the way 19th-century American businessmen sold government-backed land claims to prospectors. All it took was one person finding one gold nugget to keep people buying claims. Meanwhile, the seller of claims was making money hand over fist off all the dreamers.

What’s all this got to do with Bren, the 12-year-old protagonist of The Vanishing Island? Well, McNally may be larger-than-life, arrogant, unscrupulous, and even cruel, but he does have an eye for talent. Bren’s father is one of his best draftsmen, and he’s seen enough of Bren to know that he, too, would be skilled at making the maps that make McNally wealthy. He also knows that Bren would rather explore the world than draw it, so when Bren blunders in his latest attempt to run away from Map, McNally seizes the opportunity. He uses his considerable influence to arrange a punishment almost worse than death, believing that after working in the Vomitorium, Bren will look more fondly on a career in mapmaking.

It just goes to show that even a ruthless media mogul can underestimate a headstrong 12-year-old.

SIMPLE ENTRY - win an ARC of this great new book! Fill in the google form below. 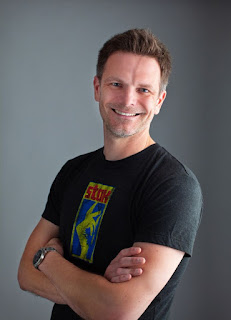 Barry Wolverton is the author of Neversink. He has more than fifteen years’ experience creating books, documentary television scripts, and website content for international networks and publishers, including National Geographic, Scholastic.com, the Library of Congress, and the Discovery Networks. He lives in Memphis, Tennessee. You can visit him online at www.barrywolverton.com.


** disclaimer ** I received a free ARC of this book in exchange for my honest thoughts.
Adventure Alternate History Blog Tour Middle Grades