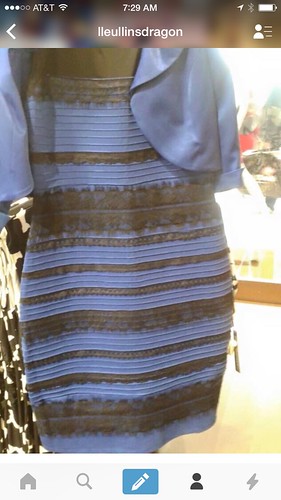 I wasn't sure if I should sign up for the Slice Challenge this year. I've been pretty awful about getting my ideas onto my blog over the past (coughs) six months or so. Still, having a specific audience and a daily challenge may be just what the doctor ordered. I've done it three years running, so I'm sure that just getting my B.I.C. ("butt in chair") will help the spice flow. I have been posting a daily photo a day on Instagram and Facebook, so I'm going to try to use those daily snapshots of my life to help keep me inspired to write.


If you've been online at all in the past few days, I'm sure you've heard of the Great Dress Debate. For the record, I'm team #WhiteandGold. Go ahead, tell me that the dress is actually Black and Blue. It won't change what I see.

What really struck me about this whole silliness, though, was the way the division in perception actually united people online. Yes, we were all tweeting and Tumblring and Facebooking about how "I am right and you are wrong". Yes, we separated into teams and hunted for evidence to prove that the other side was completely mistaken.

Still, there was a sense of humor and camaraderie about it all. There were silly memes and team picking and even people writing post-apocalyptic stories about the world "after the dress". (Don't believe me? Check it out! http://princelesscomic.tumblr.com/post/112376751706/the-history-of-the-dress-war-february-2029 ) The fact that it happened right after the internet was guffawing over a pair of escaped llamas made it feel like we were all coming down from a preschool birthday party where we'd eaten too much ice cream and cake.

Sometimes we need the silly. The world is an awfully serious place so much of the time.

Come join the writing community at Two Writing Teachers. March is the official DAILY Slice of Life challenge. Someone is there Slicing (writing personal memoirs and reflections) every Tuesday. Let's Write!