I do a lot of reading and writing in any given day. Sometimes I feel the itch to make something that doesn't require any words. I stumbled upon the idea of decoupage when I was looking for items for one of my weekly Star Wars posts last year, but it wasn't until very recently that I decided to give it a try myself.


There's something incredibly satisfying about taking apart a book or comic book to find just the right image. Never fear, I'm not a cold-blooded book killer! Some of the pages I've used for my creations come from books that are completely worn out or have water damage from students who have more book love than book savvy. Others come from extra copies of comics, or inexpensive old comics from my local comic book store. 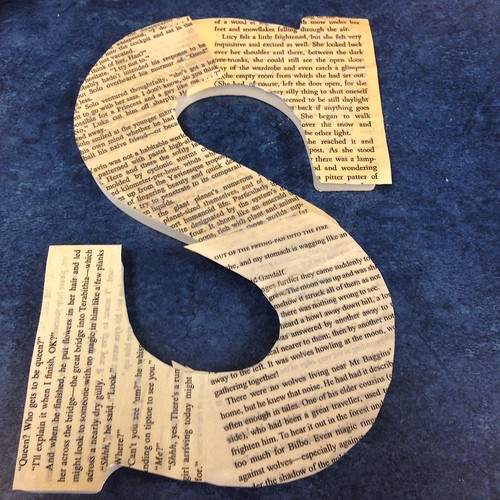 My first letter was a big S for "Selke" - at least partly to see how it all worked. I wanted to make letters as Christmas presents, and I figured it made sense to make any mistakes on my own letter first. I selected pages from Bridge to Terabithia, The Hobbit, The Lion, the Witch and the Wardrobe, and a Star Wars novelization of Episode IV. This image shows how they are arranged on my S, but they haven't been glued down or sprayed yet. The trickiest part of my arrangement was getting the precise bits from each page just where I wanted them. 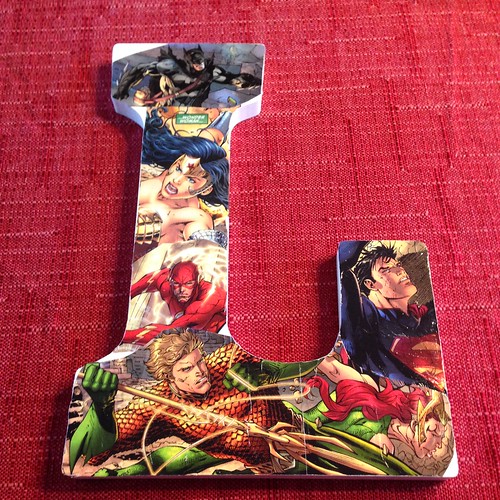 Next up - letters for my nephew and niece for Christmas! My nephew loves superheroes, so picking his theme was easy. I had an assortment of characters from Justice League comics, and even some from Free Comic Book Day. I had about 20 images that I moved around and around until I got everything in just the right place.

I was particularly excited to find a way to incorporate two amazing ladies into his letter. At first, I only had a "posing" Wonder Woman image. Her passive stance and pouty face made me want to weep. As you can see, I found a much better depiction to include instead. 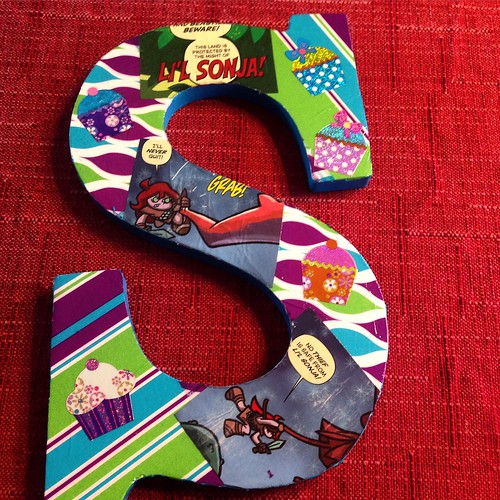 My niece deserves some comic joy also. Her name is Sonja, so I snagged a Li'l Sonja comic to use on her letter. The colorful bits are tissue paper from the craft store. My younger son insisted we add in the cupcake stickers. That's a little inside "joke" between him and the little bugger. My son calls her "cupcake" and kept trying to get her to say the word when we were at their house just a few months after she was born.

Lessons Learned: Overlapping colored tissue paper looks TERRIBLE. That's why the comic images are placed where they are. 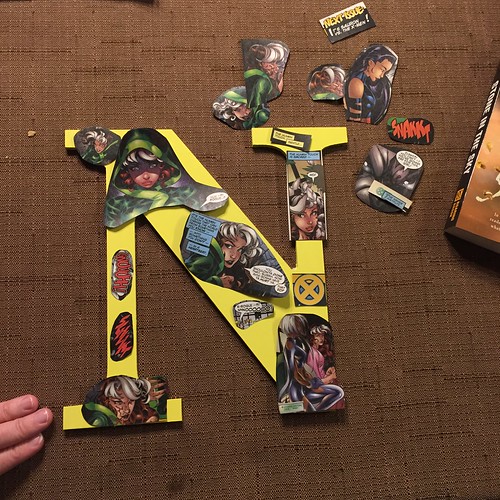 My goddaughter received the next letter. She loves the X-Men, and Rogue is her favorite. I had picked up some bargain Uncanny X-Men at the comic book store, and was pleased to see one comic focused on this character. This photo is from the layout stage. I still have a lot of images from this comic that I can use for later projects. 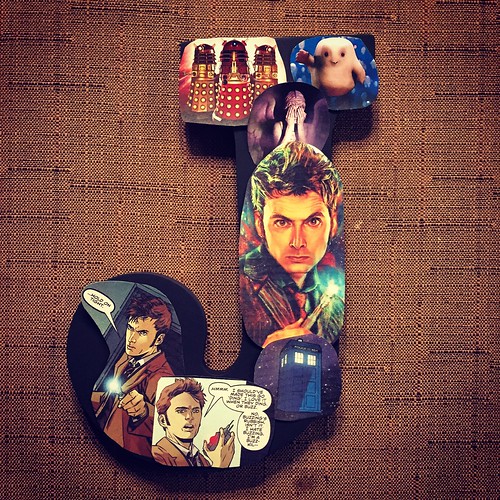 Just this past week, I made another letter. This one is for my younger son, who is a serious Whovian. Ten is "his Doctor", and I made sure to include his absolute favorite villains. Did you know that Titan Comics currently has comic runs for the 10th, 11th, and 12th Doctors? They'll be starting up a comic for the 9th Doctor soon, too. 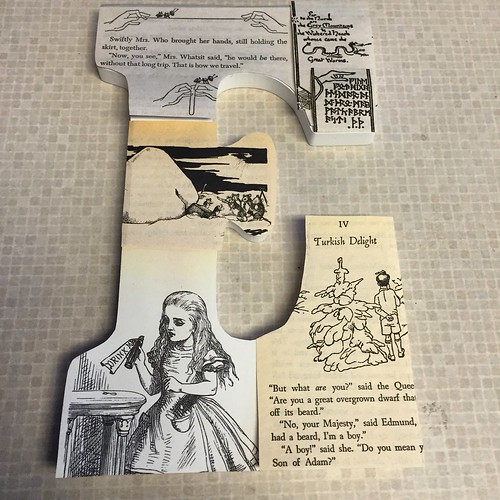 Since my itch to create hasn't yet abated, I acquired the rest of the wooden letters to make my last name and started my next letter on Monday. Can you recognize the books I used for this one?

My other letters are in a pile, ready for our next snow day. My scissors and Modge Podge await. Making is fun!

Come join the writing community at Two Writing Teachers. March is the official DAILY Slice of Life challenge. Someone is there Slicing (writing personal memoirs and reflections) every Tuesday. Let's Write!
Slice of Life SOL15