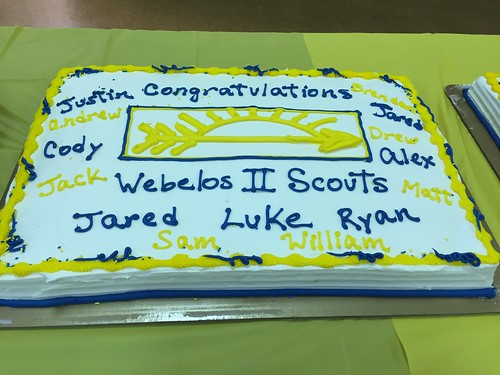 The Cub Scout era of the Selke household has (mostly) drawn to a close. My husband and I have spent the past seven years of our lives devoting a ton of time and energy to making sure both of our sons - and their pack mates - had the best possible experience during their elementary years.

I may not be the best with tools, but I'm thankful that both my husband and my den co-leader had the know-how to make sure that both boys got to build birdhouses, toolboxes, pinewood derby cars, and more. No one lost a finger or ended up with any nails driven into any body parts. I count that a major win.

Risk tolerance is another one of my... well... I'm pretty cautious. So I'm also thankful for Cub Scouts providing my sons with the chance to climb and cut and walk across high bridges. I bit my lip and dug my nails into my palms on a few occasions, but I knew this was what was best for them.

Both of my sons are now officially part of a Boy Scout Troop. While I loved watching them learn and grow as Cubs, there's something about Boy Scouts I like even better. In Cubs, each boy is really only exposed to other boys his own age. Our dens are grade-level based. In Boy Scouts, each boy has a chance to be with boys both older and younger than him during meetings and outings.

If you could have seen my younger son at our Blue & Gold ceremony, you would get a glimpse as to the power of this one little change. We had three Boy Scouts at our table that night. They were all Scouts from his new Troop. Granted, one was a boy he has known his whole life (my best friend's son, who is in 10th grade). Another was my older son, but my younger doesn't really listen to him very well. As the three older boys chatted and shared stories from the Troop, my younger son was enthralled. He hung on every word. My older son, who has been with this Troop for two years now, eagerly joined in the conversation to show off the connections he has there.

They both now have a whole Troop of older brothers. Boys who will look out for him, be silly with him, and prod him back into line when he strays too far from the path. There's something about advice from an older boy that sticks with a younger boy far better than anything a parent can say. My older son wouldn't get that anywhere else.

At some point, in the not-too-distant future, they'll both BE that older brother. For my youngest child, he won't get that chance at my house. Both of them will be able to guide and lead and teach as they show that they have the ability to handle those responsibilities.

We've never had a "small town" existence. They don't have multi-age groups at home (except for each other - and you know how brothers can be), and one room schoolhouses are a thing of the distant past.  The chance to be led and lead in this Troop is one of the best things I can give to my boys. I know my husband and I will take on a lot of extra responsibilities in our sons' Troop the way we did in their Pack, but it will be worth it.

We're excited to now be a full time part of Troop 83.

Come join the writing community at Two Writing Teachers. March is the official DAILY Slice of Life challenge. Someone is there Slicing (writing