What if you could live forever? Would you even want to?

Those simple questions are at the very core of Tuck Everlasting, but they are also questions that have driven humans to explore, experiment, and create since our earliest records. We seek the fountain of youth. We create more effective medications to combat our illnesses. We write books and screenplays exploring the lives of those who can live beyond the span of a human lifetime.

Is it the fact that we know it will never be truly possible that leads us to create immortal characters who are filled with loneliness and regret?

The Highlander movie shows us the pain and suffering that comes when one partner is young and immortal, while the other cannot help but grow older. Bonus points for a cool Queen song to accompany a traumatic movie scene.


The Elves of Middle Earth grow bored and restless over their long lives. More of them than we could imagine give up their longevity to spend a single, mortal life with a beloved human.

Vampires haunt our storytelling, but their immortality comes at the price of their souls. Recent tales of blood-suckers may make them seem less evil, but they are still always lonely and searching for purpose and connections.

The Tuck family stumbled upon their gift, but the price is high. They can never settle down. They must constantly roam to avoid detection. They guard a secret they know humanity can not be trusted to use wisely.

Even with those sobering examples, the idea of living forever - or at least for a very long time - is alluring. I'm at the age now where I have so many things I still want to do, see, and experience. I want to see my children as adults. I want to see what happens as we push farther into the cosmos. I want to hold onto my loved ones and never let them go. Yet I know I'm on the slippery slope downward. Downward to mortality.

If someone handed me a mug of the water of eternal life, would I drink? I think the lure of curiosity and love would tug on my quite strongly, as long as these conditions could be met:

- Companionship. I wouldn't want to be one of an elite few. Yes, I know that death is part of the cycle of life. I know that if everyone lived forever there would be no room on the planet. Still, I would not want unending life if it meant I would be alone or stuck with just a handful of people who knew me. The Tucks have each other - but that's a pretty tiny group with which to spend eternity!

- Health and Vitality. Does this go with living forever? It better, or I'm not signing up! Most tales of eternal life have you stop aging once you cross over. While being 42 is just fine for me now, I think I'd rather have the health and vitality I did in my mid thirties. Clear vision, a strong heart, and no aches and pains would be imperative. What good is it to live forever if you roll out of bed each morning with back aches and a cranky stomach?

- Wealth. Hiding your eternal nature would be increasingly difficult in today's globally wired world. With finger printing and retinal scanning and.... whatever else we come up with in the next few years to check identities... it would take an awful lot of money to circumvent the system. I'd also need quite a little nest egg to do all the traveling that is on my bucket list. Pyramids of Egypt? Check. Walking the Great Wall? Check. Paying someone off so I can watch sunrise at the exact right time in the exact right spot at Stonehenge? Check!


Clearly, none of those things are really possible. So instead of that glass of bubbly water of life, I'd like:

1) Healthy longevity. Let's kick cancer to the curb. Let's find a way to help everyone live in health and comfort. Let my loved ones live long and healthy lives so we can enjoy one another for as long as possible.

2) Healthy economy. I'm planning for retirement, but that economy needs to stay at least stable so I can enjoy it.

3) Healthy mind. I want to be able to read and write and think until I take my last breath. That's reasonable, right?


What would you do? Would you choose to drink from the spring of eternal life? 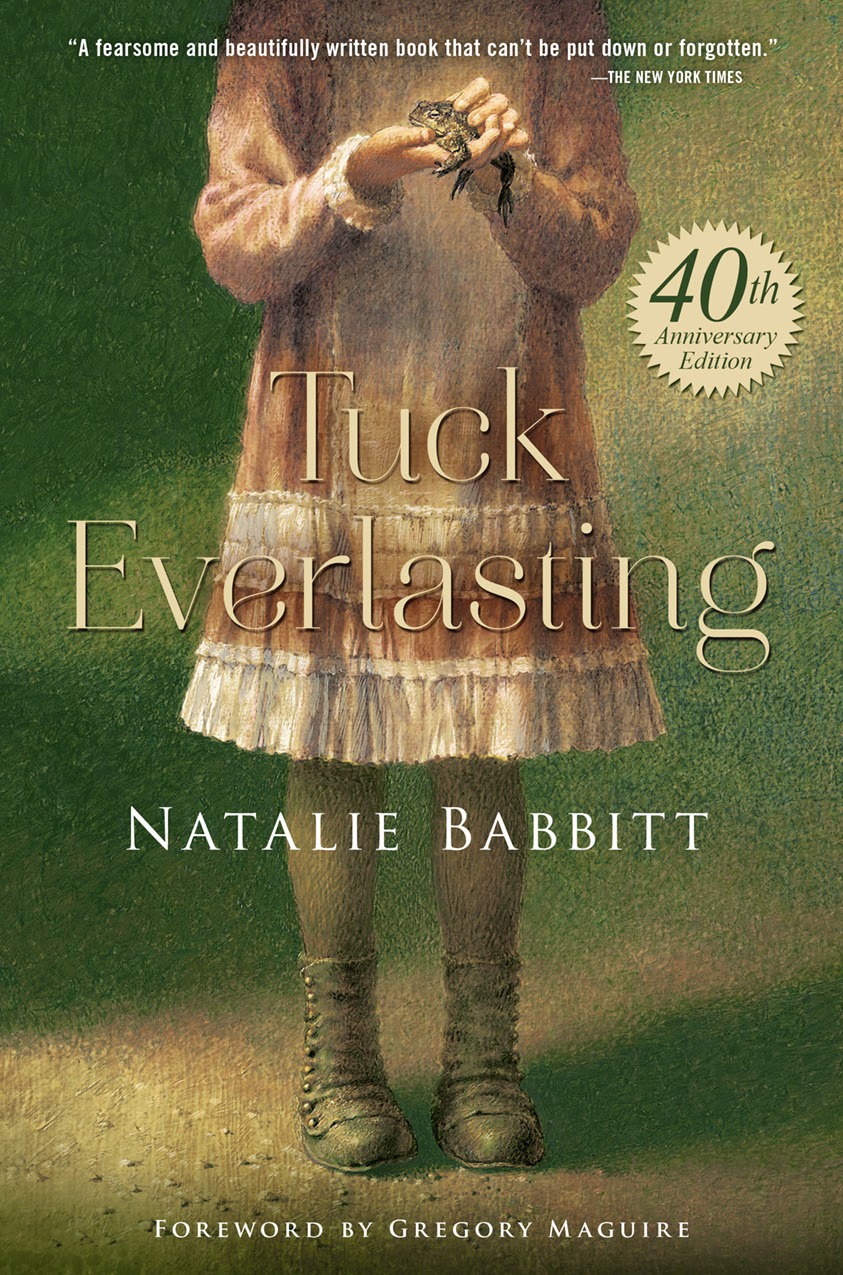 Natalie will be in conversation with Gregory Maguire at Symphony Space in New York City on Sunday, January 25 at 1:00 PM. Alexis Bledel, star of the 2002 movie adaptation, will read from the book.

Tuck Everlasting asks readers “What if you could live forever?” Doomed to, or blessed with, eternal life after drinking from a magic spring, the Tuck family wanders about trying to live as inconspicuously and comfortably as they can. When ten-year-old Winnie Foster stumbles on their secret, the Tucks take her home and explain why living forever at one age is less of a blessing than it might seem. Then complications arise when Winnie is followed by a stranger who wants to market the spring water for a fortune.

Upon the book’s publication in 1975, Natalie was greeted with concern from parents and educators who were stunned to read a book about death written for children. She is an author who challenges her readers and thinks the best questions are the ones without answers.

This 40th anniversary will introduce a whole new generation to this timeless classic. The book has sold over 3.5 million copies in the US alone, and has never been out of print since publication.

NATALIE BABBITT is the award-winning author of Tuck Everlasting, The Eyes of the Amaryllis, Knee-Knock Rise, and many other brilliantly original books for young people. She began her career in 1966 as the illustrator of The Forty-Ninth Magician, a collaboration with her husband. When her husband became a college president and no longer had time to collaborate, Babbitt tried her hand at writing. Her first novel, The Search for Delicious, established her gift for writing magical tales with profound meaning. Knee-Knock Rise earned her a Newbery Honor, and in 2002, Tuck Everlasting was adapted into a major motion picture. Natalie Babbitt lives in Connecticut, and is a grandmother of three.