When Alyson asked me to participate in this blog tour, I knew immediately which book I wanted to share. It's partly because I haven't read as many of the Schneider Award winners as I would like to, but mostly because this book is nearly perfect.

It had been on my "to be read" list for several years, but I finally made the space to read it in December of 2013. My colleagues and I were doing our second annual Bookish March Madness, with titles selected by our students, and Mango appeared on the list both years. What was it about this story that appealed to them so strongly? 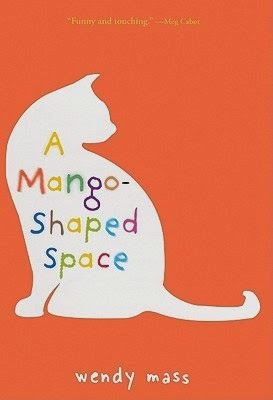 Mia Winchell appears to be a typical kid, but she's keeping a big secret—sounds, numbers, and words have color for her. No one knows, and Mia wants to keep it that way. But when trouble at school finally forces Mia to reveal her secret, she must learn to accept herself and embrace her ability, called synesthesia, a mingling of the senses.

My Thoughts:
I had heard of synesthesia before, and it intrigued me. Mia's sense-mingling was a fascinating hook for a story. Kids can be cruel, and they aren't always accepting of those who don't fit in. It can be frightening to be different, and Mia's desire to hide it from those around her struck me as incredibly realistic.

I loved how there were so many other facets to her story, too. She's growing up, and has trouble figuring out her place with her friends in school. She has trouble in school, even though she seems like a bright young woman. Mia struggles with her spot as a middle child. She argues with her older sister. She bickers with her younger brother. Unlike many middle grade tales, though, her parents are both present and love her dearly. Her family feels like one that could easily live in my neighborhood, or be in my school.

What Makes it Special:
What I love most about A Mango Shaped Space, though, is that her difference is portrayed as both a blessing and a challenge. The synesthesia causes her to have trouble in math and foreign languages, but it also gives her a unique and creative perspective. Mia has no desire to change into someone she is not. Once she understands that her condition isn't a sign of a serious medical problem, she embraces her view of the world, and harnesses it in her art. She even reaches out to help a younger child avoid falling into her own pattern of hiding her truth from those around her.

This is a story of a young woman coming out of hiding. So many girls are convinced that they can only fit in if they wear a mask. She may be concealing talents to avoid the appearance of conceit. She may hide interests she has been told are "too masculine". Whatever her reasons for not embracing her true nature and sharing it with those around her, Mia is a wonderful example of the power of sharing your true self with those you love.

In the Classroom:
A Mango Shaped Space is a perfect title to help with discussions about:
Creativity
Acceptance
Sibling relationships
Individuality

If kids are curious about synesthesia after reading, there is information at the end of the book to help them learn more.

The Noisy Paint Box: The Colors and Sounds of Kandinsky's Abstract Art