Batty about the end of Not a Drop to Drink 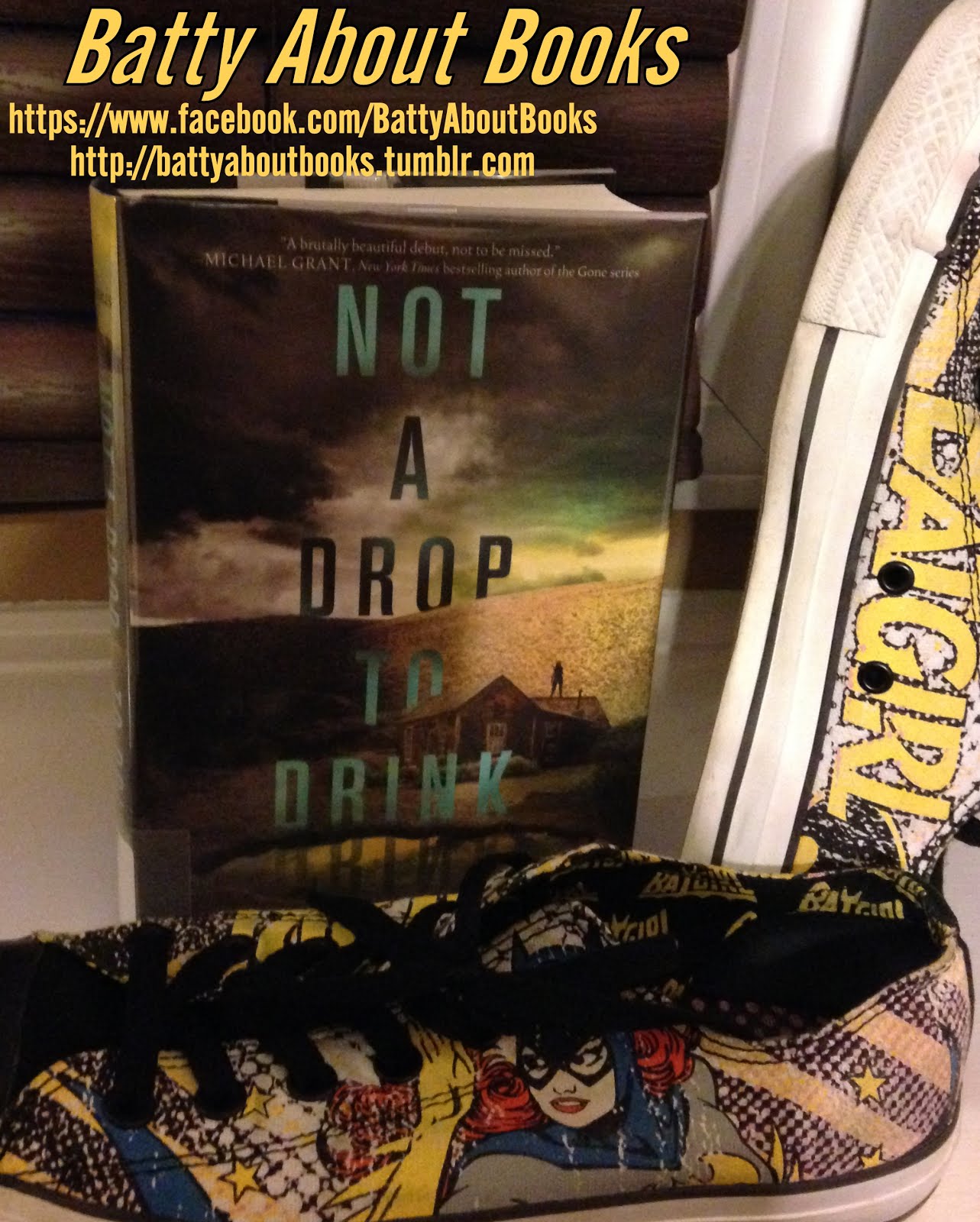 Welcome to all those who decided to do a read-along with Batty. Welcome to those who are just stopping by the blog to hear about Not a Drop to Drink. Today’s post has some spoilers, since it is hard to write about the end of a book without them!

Want to join in the fun? Check out our…
Facebook Page
Tumblr

For those of you who are new to our Batty Chats - Maria’s thoughts with Kathy’s responses are hosted here on the Melange. Kathy’s (aka @thebrainlair) thoughts with Maria’s responses reside on The Brain Lair. Take a peek at both of sides and add your own voice into the mix!

I had some mixed feelings about the ending chunk of this book. Once again, I think sometimes the way we are reading the book - dividing it into smaller pieces - calls greater attention to some of the problems I might miss if I just gobbled it down quickly.
Kathy: Do you suggest we read a book, keeping notes along the way and then just post? I think it would be easier for me, reading wise, but I think I’d have to wait for summers and breaks to actually write that way. I don’t know though.  We could try it… We did that for Fahrenheit 451, and it was one of our better discussions. Maybe we try it for the next book and see?


The Pacing
I’m starting with this, because it was the main thing that didn’t do it for me with this ending. We spent so much time building up to this battle, and then it just blew by too quickly. I don’t often ask for a book to be longer (well, maybe I do.. I really like long books and long series). So I guess it is that I don’t want a book to be PADDED… but I feel like the major crisis in the book came and went way too quickly. When I spoke to a friend about the ending, this was her biggest complaint as well.
Kathy: The too fast ending, with so many twists and the battle, was the downfall of the book for me. I had already thought the second part was slow, but this was too much too absorb. I didn’t feel anything for any of the characters since there was no real development that I could see.


The Romance
“even though her balance was good, she’d slipped more than once when Eli was nearby.” - pg 201 Was this on purpose? It reads like it was, and that makes me sad. Lynn is so competent, and I wish she didn’t default to pretending to NOT be competent to flirt.
Kathy: I was hoping she slipped because he made her nervous, not because she wanted to look needy. Her background up until this point would suggest she would not do it on purpose.

No spoilers here - I won’t be the one to tell you how the Eli/Lynn pairing works out. I loved most of their interactions, though the one above made me cringe a little. I would hope that playing weak is a learned flirtation technique, not one that someone with no background with boys would naturally use!

Better is this exchange, when Eli is complimenting her aim.
“Stebbs says I’ve got nothing on you.”
“True enough,” Lynn said, and they laughed again. (page 208)
See? Eli likes you for your competence…. keep that going, Lynn!

Even better is when Eli realizes that he isn’t quite sure if Lynn is ready to kiss him… so he asks first. (page 213)
Kathy: Though I liked the asking and everything that led up to it, I didn’t buy the afterwards...Are we to assume her curiosity outweighed her fearfulness? Agreed. Though, as I mentioned on your post, it’s been a long time since I was in the “know but don’t yet understand” stage of my life.


The Men from the South:
“They’ve got a few women over there. Vera said a gallon of gas gets you half an hour” (pg 268)
As we expected, the danger comes in from the men they had seen in the south. We’re so close to the end of the book now, that I don’t want to spoil this part of the plot. The tension is ratcheted up so high at this point, and the men do things that made me so angry I wanted to scream and spit at them right through the screen (I had an ebook). I’d like to believe that people wouldn’t really act this way in a crisis. I’d like to… but I think history has shown us over and over and over that they DO act this way. So why did it make me so angry to have McGinnis put some of these plot points in here?
Kathy: Because they felt superfluous.  I thought the whole sex thing didn’t jibe with the rest of the story. I kept wondering if the story would be just as good, or even better, if that part wasn't included and I think it would have survived. I don’t think the overall story would have suffered since many things were just mentioned, as if in passing. These instances throughout the story were the parts I didn’t like. I kept waiting for something major and don’t think we got it through the this.

And the leader of the men? Maybe this is where the pacing issues come into play, but I also felt slightly upset that this person claimed to be responsible for Lynn’s safety up til now. I felt like it robbed her and her mother of much of the strength I’d seen in them.
Kathy: I didn’t really get that feeling. Since he hadn’t been there all along, just in the past year, I think he only saved them from being added to his “trade show”. And not out of a feeling of kinship, more as if he was waiting to see how he could profit from them still being alive. Like he hadn’t decided what to do with them just yet.

The Deaths
Okay, so this bit gets really tricky to discuss without spoiling. I’m STILL not sure how I feel about who got killed off. I have thought about it over and over, and it still upsets me. I think I’m okay with the deaths… I think… maybe? I do like the fact that Lynn made her own choices, in the end.
Kathy: I was not happy. Not one bit. They weren’t warranted in my mind. Especially the next to last one. I didn’t care one way or the other about the choice Lynn made in the end though.

Overall:
In the end, I am glad we read Not a Drop to Drink. In spite of the pacing issues at the end of the book, I enjoyed the story. The characters were appealing, and the world itself was both frightening and believeable. I adored the way Lynn learned to open her heart and find friendship and companionship along with safety in numbers. I enjoyed thinking about survival, even though the idea of a coming apocalypse caused me nightmares from time to time (but I also watch The Walking Dead, so I can hardly complain about that).


Kathy: Overall, I thought it was ok and really hope the movie option comes to fruition and we see it on the screen. I would like to see the flesh out some of the issues I had with part three. I would have liked it much more if it had more time to make the end live up to the rest of the book. I will add it to my library, for sure. I want students to read other types of dystopias than straight action.  Yes! There was a lot I enjoyed about the story, and I hope that the next book develops all the parts of the story completely.

I really want to know more about the world, especially what is happening in the city. It seems like what we’ll get, though, is a companion novel set several years into the future of their world. Here’s the blurb about In a Handful of Dust, set to release in September.

The only thing bigger than the world is fear.
Lucy’s life by the pond has always been full. She has water and friends, laughter and the love of her adoptive mother, Lynn, who has made sure that Lucy’s childhood was very different from her own. Yet it seems Lucy’s future is settled already—a house, a man, children, and a water source—and anything beyond their life by the pond is beyond reach.
When disease burns through their community, the once life-saving water of the pond might be the source of what’s killing them now. Rumors of desalinization plants in California have lingered in Lynn’s mind, and the prospect of a “normal” life for Lucy sets the two of them on an epic journey west to face new dangers: hunger, mountains, deserts, betrayal, and the perils of a world so vast that Lucy fears she could be lost forever, only to disappear in a handful of dust.
In this companion to Not a Drop to Drink, Mindy McGinnis thrillingly combines the heart-swelling hope of a journey, the challenges of establishing your own place in the world, and the gripping physical danger of nature in a futuristic frontier.
Kathy: I want to read the next book. But, it’s May and that’s September. It’s on my Goodreads list but I make no promises!

Batty About Books Not A Drop Post-Apocalyptic young adult