Batty About The Archived by Schwab - Part One Discussion 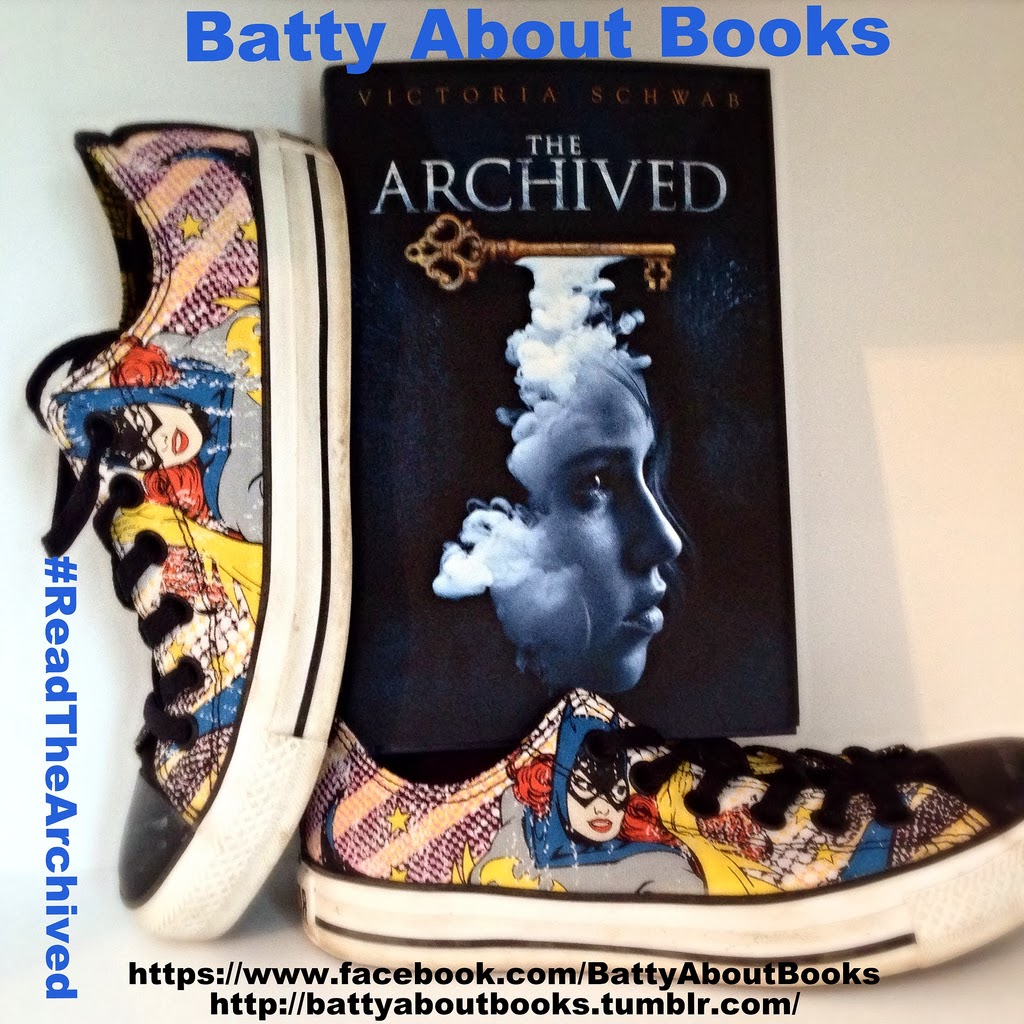 Welcome to all those who decided to do a read-along with Batty. Welcome to those who are just stopping by the blog to hear about The Archived. Today’s post is as spoiler free as possible. We are discussing the first chunk of the book. If you haven’t read that section yet, feel free to either read and join in the chat or wait until you’re done and come back.

Want to join in the fun? Check out our…

Post on Nerdy Book Club explaining how we’re opening up our Batty Duo to everyone this time around!


For those of you who are new to our Batty Chats - Maria’s thoughts with Kathy’s responses are hosted here on the Melange. Kathy’s thoughts with Maria’s responses reside on The Brain Lair. Take a peek at both of sides and add your own voice into the mix!

Maria: I’ve had a lot of fun picking out quotes from the first section and posting them on our Facebook and Tumblr page.

I thought it was so funny that the first quote we both chose was from page 2. 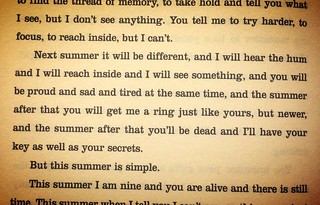 I loved how this single quote gave us a peek into the future - Mac’s future. It set me up for the loss and despair she would feel, and helped me understand her desire to cling to the old memories.
Kathy: She is so full of sadness isn’t she? She has lost the two people who seem dearest to her. And then they moved and she lost her best friend. Even though it’s only an hour away, when you don’t drive - that can seem insurmountable. That quotes is about growing up. How you learn new things but you also need to leave some things, or some people, behind. And it’s both happy and sad. And tiring.

Maria: As I look back over the quotes I have posted so far and the notes I’ve made, it seems like I’m picking up a few categories that jump out at me about the book.

1) Memories
pg 5 “Living people haven’t been compiled, organized -- which means they’re a jumble of memory and thought and emotion, all tangled up…”

I’m intrigued by how this world holds onto the Histories. I’m curious, though. There ARE books - so what benefit does the Archive have for the world? I wonder if we’ll see more insights into how the memories in the Archive help or hurt humanity.
Kathy: I think that is what Mac is wondering too. When she sees a disturbing event in the past and then finds that the directories have been removed, erased, she goes to the Archive to see if she can get answers. Because, why all do we keep them. Then again, are all of your memories helpful? Even if know one else knows about them outside of yourself? I think so. Sometimes the benefit is just to know we were here.

Maria:
2) Curiosity
“Curiosity is a gateway drug to sympathy.” pg 30
It’s funny that this statement is a negative in the book. Mac is told that she should NOT be curious, and that sympathy with the dead is something to be avoided. Yet I read the quote as I begin a unit of historical fiction with my students. I cultivate curiosity in them. Curiosity about the lives others live IS the gateway drug toward sympathy - toward understanding - toward making connections with those who aren’t exactly like us.
Kathy: Definitely a quote you want in a classroom or library! What a great way to kick off any unit. Reminding them that the more we learn and understand, the more sympathetic we become and we begin to see why people made the choices they did. As long as we don’t let that understanding blind us to any mistakes that were made in the past or ways we can make things better in the present.  That’s a great point. We don’t want to focus so much on understanding that we lose the ability to make moral judgements and better choices now.

Maria:
3) Coping with loss
This also ties into memories. Mac is so desperate to hold onto each memory, and her mother seems just as desperate to ignore the past and jump into the future with such a whirlwind of energy that she doesn’t have to remember at all.

When Mac answers the question about being an only child, I winced. There have been many times I’ve talked to strangers who have asked me about my siblings and I have the same defense mechanism. It’s easy to just chat about my sister and I’d rather not talk to people about the loss of my brother. Even new acquaintances tend to jump right in with “what happened to him?” and not stop to think how painful that conversation might be.  It does feel like betrayal, but it’s also self-preservation.
Kathy: Sometimes talking about the people we lost makes it seem so new and painful again. Sometimes I feel like how could those people understand and know how important my mom was? Those are just words they are saying, they didn’t, and now they can’t, know her. I don’t want to share my memories because they are so personal. So mine. If I tell them - will this lessen my feelings in some way? Will they really be listening or are they just asking out of kindness?

Maria:
4) Family Relationships
Da - This is a weird thing - when I started the book I was confused about Mac’s relationship with Da. I originally thought that Da was her father, and that Dad was a stepfather. Then it seemed like maybe they had been a family with two fathers and a mother? Finally, I read a part that called Da her grandfather and it fell into place. I’m so curious as to why I was confused by this. It seems like Da being her grandfather would be the least
complex solution to my conundrum - but it really wasn’t at all my first idea.

Dad - Okay, so maybe this is why. Dad seems so pale - like he’s been drawn in the story with watercolors that are way too diluted. I’m assuming at this point in the story that he is Da’s son, but I’m curious as to why he’s not feeling like a real person yet. This lack of definition in his characterization may be what led me to think Dad was her stepfather, especially when compared with the vivid way Da jumps off the page.
Kathy: I never had that confusion. I was just wondering why he didn’t choose someone older. When he presented Mac to the board of Librarians they asked him why Mac and not his son, Peter (p53). Which I assume is Mac’s dad’s name. (checking page numbers, weirdly can’t find anywhere where the parents call each other by name...) There are two instances where I think Mac’s dad knows what she is up to. “Dad is still looking at me rather intently, eyes panning over my dark clothes and long sleeves, all the pieces that don’t add up.” (61) There’s also the part on pg 9 where she has to go get a History and “something flickers across Dad’s face” when she lies about what she needs to do. Did he know what Da was up to and, if so,  is he sad that he wasn’t “chosen”? Da says he “wears his lies” (53) which would mean Peter can’t Keep the secrets of the Archives. BTW, I picture Da as an old Clint Eastwood-type, like he was in Gran Torino.

As always - I’m bound to write almost as many words here as are in the actual book, so I’ll start to wrap it up.

The Setting - it feels almost Gaimanesque (and that’s a good thing). It’s the real world but not. Hidden layers and darkness that could actually be in our own homes and backyards. Schwab describes Da’s “Louisana lilt”, which places us firmly in the US. Is this the future? Is this an alternate reality? I love it.
This is a great book to use to teach how important setting is, even though the strong setting is the Narrows. I can picture the Narrows and the Archives better than I can picture the city they live in. I also get a picture of the Coronado. The places here are like characters. They are vividly drawn and necessary to keep the story flowing. If we made the Archive a real place that we already know, it wouldn’t be as haunting. It has pieces we recognize but we can’t see all of it. It’s like a morgue and a library. Is a morgue a library? Is a library a morgue - where we put books to be examined before they go to their final resting place? YES! Yes to all of this! Excellent observations.

Wes fascinates me. I can’t wait to get to know him a little bit better. Right now the only Archive staff we’ve known are adults and Mac. It will be interesting to see how another person her age handles the same difficulties and responsibilities.
I talk about Wes too! I love the contrast between his view of being a Keeper and Mac’s. And I’m intrigued that Patrick, the Librarian, told Wes about Mac but no one told her. He seems to embrace his job. How did he get it? Was it passed down from one of his parents? Is that the normal route? Is this a family affair? Once a Keeper or Crew becomes a librarian, do they ever go back to the Outer? What happens to their family or don’t the ones who become Librarians have family? Anyway - back to Wes! I love that she thinks he’s attractive with his “guyliner”, nail polish, spiked hair, and half-smile. I can almost picture him - I haven’t read many books with a protagonist described this way. I can’t wait to learn more about him.
My high school years spent doing lots of theater bias me toward “guyliner”. Guys looked great with that little bit of an accent around their eyes. I love the fact that it makes him sound so confident and slightly quirky. Love that.


Okay - now I really need to jump back into the reading and find out what happens with the History named Hooper and the knife he’s holding up against her throat…
Posted by maria.selke at 6:29 AM

Email ThisBlogThis!Share to TwitterShare to FacebookShare to Pinterest
Labels: Batty About Books, Read The Archived