I've read several great science and science fiction graphic novels over the past few weeks, so I need to start catching up on the posts so that YOU can find out about them!

Today's selection is historical fiction - but with a very heavy dose of history. If you haven't learned anything about the Soviet space program from the 50s, I'll need to warn you that this is a "dead dog" book. 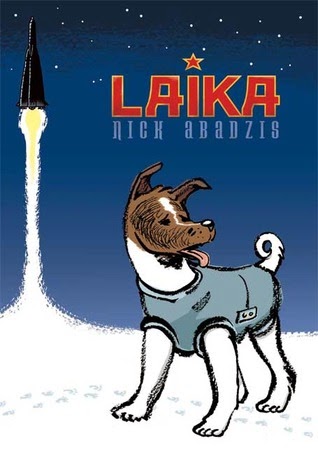 Goodreads Blurb:
Laika was the abandoned puppy destined to become Earth's first space traveler. This is her journey.

Nick Abadzis masterfully blends fiction and fact in the intertwined stories of three compelling lives. Along with Laika, there is Korolev, once a political prisoner, now a driven engineer at the top of the Soviet space program, and Yelena, the lab technician responsible for Laika's health and life. This intense triangle is rendered with the pitch-perfect emotionality of classics like Because of Winn Dixie, Shiloh, and Old Yeller.

Laika is the winner of the 2008 Eisner Award for Best Publication for Teens and an Eisner Award nominee for Best Reality-Based Work.

I've always been fascinated by space exploration. While I wasn't alive in the 50s, and I missed the glory days of the American moon missions, I can remember reading about mankind's desire to explore the vast reaches of the heavens since my earliest days. My very first book review - written for a kid's magazine the title of which I've long since forgotten - was a book about astronomy.

Laika's story as told by Abadzis must be considered historical fiction, because the creator fabricates a whole back story for the dog herself. I wasn't as excited about those sections, because I often felt like the extra storyline was there to make me feel even worse about Laika's fate. It certainly worked - I was heartbroken - but I don't know that it was needed. I think the impact of Laika's death would have still been strong even if we hadn't known about her life before the Soviet space program.

The peek into the world of the Soviet Union, however, was fascinating. The information in the back of the book reassures me that Abadzis did extensive research on the time period, so I'm assuming that the historical pieces of the story are as true as possible. The Space Race and the Cold War are time periods that students read about, but don't get the chance to step into the shoes of the real people who lived those lives. Meeting the people who launched Sputnik and those who worked with the dogs who became the first creatures to orbit the planet helps to humanize this time. That's always a good thing.

I do wonder about bias, though. Is it possible to tell the tale of this Communist nation from outside and really give a full picture of the way their system worked? I'd be curious to know what historians from both sides think of this tale.

The artwork has more than enough detail to help readers keep track of the characters, and the expressions on Laika's face are especially endearing. The panels are easy to follow, yet mix in sufficient variety to keep the pages interesting visually.

Of course, we all know what Laika will face on her one way trip into space. Did I tear up? Absolutely. Using Laika in a high school history class would be a great way to bring up, and possibly start a debate on, the ethical treatment of animals in the past and today. When - if ever - is it okay to put animals in jeopardy?

Overall, I highly enjoyed Laika and would recommend it to those who want to learn more about the history of space exploration, enjoy history in general, or are fascinated by cultures different from our capitalistic society.