It was early January, and I started to watch Sherlock on Netflix to get me through my elliptical routine. I enjoyed it… but something intervened.

(That something was a big blue box called the TARDIS. Six months and seven series later, I was more than an official Whovian. I was a fanatic fan.)

Still… something about Sherlock Holmes beckoned to me. I love the idea of Sherlock. I love his lack of interpersonal skills and his overwhelming hubris. I adore how he notices… everything. I love how his connection with Watson has been depicted over the years.

Since I started my school year reading mysteries with my students, I took the time to reread Hound of Baskerville and the Adventures of Sherlock Holmes for myself. I even attempted to have my fifth graders read one of the short stories that were most appropriate for that age (though only a few of my students went on to read more themselves… since they are pretty tricky).

So when Karen announced that she wanted to run a blog series celebrating the return of Sherlock, I knew it was the right time to jump in with both feet. I’d like to take a moment and apologize to all my friends who have been pressuring me to watch the series. I’m sorry it took me so long. I’m so, so sorry.

What I Love About Sherlock

Sherlock is a cultural icon. People who haven’t read any of Doyle’s stories or seen any plays or movies still know who he is. There are behavioral oddities, styles of dress, violin playing, and verbal tics that need to be present for any version of Sherlock to be truly … Sherlock. BBC got it right. This is the Holmes I wanted to see. He is abrasive and prideful. He’s observant to a fault, yet strangely unable to process the feelings of others. He’s so easily bored that it is dangerous. In spite of his prickly exterior, there is a yearning for connection that makes his friendship with Watson the keystone of the tales. All of these things combine to make Holmes so appealing.

Modernizing for our Times


BBC did a great job keeping the core, but they also did a phenomenal job updating Holmes for our modern world. Sherlock’s attachment to his cell phone and his preference for texting are exactly what I’d expect to see. I was pleased by the fact that he doesn’t use the smart phone to look things up often, since his own mental palace is still chock full of tidbits that help him solve a case.

Watson’s blog is the perfect modern expression of his predilection for documenting their cases. BBC actually maintains a website where you can read Watson’s blog posts. How cool is that? There are posts from the actual episodes, and there are posts from after the season two finale. Now that is social media connection done right! http://www.johnwatsonblog.co.uk/


Visual Storytelling
It’s not just the characters that I like. The whole story telling style of the series appeals to me. Texts appear on screen so I can read them. Sherlock’s visual processing appears on screen as well, which lets me feel like I get to do the puzzles with him, even though I primarily identify with Watson. This is a way of experiencing life with Sherlock that is wonderful!

The little thrill I got when noticing tie ins to the original stories and mythos.

Watching the show without knowing Sherlock Holmes at all is probably almost as amazing. Almost. I found that the big and small references made a great experience even better, though! Some of the little things that would have passed me by before reading some of Doyle’s work this year were the “orange pips” alluded to in “The Great Game” and the titles of episodes like “A Study in Pink” and “A Scandal in Belgravia”. I loved noticing how the show writers took even the most familiar stories, like “The Hounds of Baskerville”, and respected the original plot lines while still updating the tale for the modern day. That takes some serious talent! Even casual Sherlock fans must have been amused by the addition of the deerstalker hat, though. Well done!

Hopefully fans of the show who haven’t already read them will dive into the Doyle stories.


The friendship between Holmes and Watson

This is probably the part of the show that made me love it the most. Characters with puzzle are cool. Characters with intriguing relationships live in my heart forever. Holmes doesn’t have friends. He has a brother who annoys him. He has colleagues who find him irritating. He has clients who are grateful for his service.

Then he meets Watson. Finally, he has someone who appreciates his intellect. Holmes and Watson have an almost Time Lord / Companion relationship (especially of the Donna/Ten variety). Watson will stand up to Sherlock when he needs to be backed down. He even makes Sherlock apologize! As I watched the final episode of season 2, though, I realized that Watson needs Sherlock just as much. His goodbye at the graveyard was heart-wrenching.

I’m not on board with the “shipping” in this fandom (I think the value of male platonic unconditional love is highly underrated in our society), but I am in awe of the way this pair supports one another. We need more emphasis on this kind of friendship.

What do you love best about Sherlock? Do you have any favorite stories or modern incarnations? 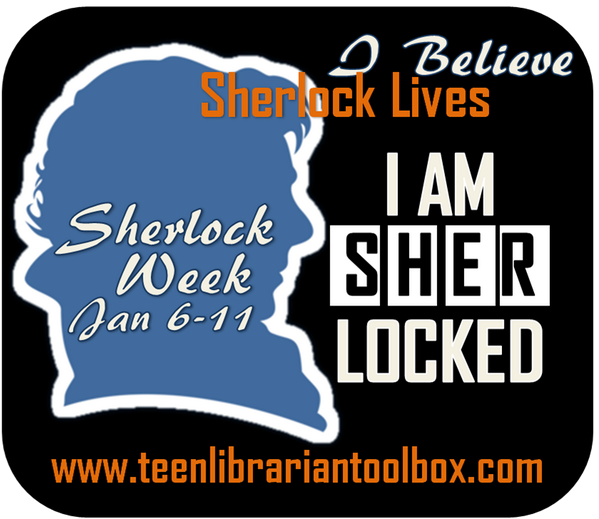 This post also lives at Teen Librarian Toolbox - part of Sherlock Week! Be sure to visit the site for more fabulous posts about Sherlock, including reading lists for MG and YA, fanfiction, and Sherlock library programming.