I've always been a SciFi Gal, but this year marked my descent into utter madness and obsession when I began watching Doctor Who for the first time.


I did have one small problem. Being completely hooked, and wanting to see ALL the things, I found myself fighting against... Yes, I had a few little plot points spoiled. Yes, I was a little frustrated by a few things I found out before I should have. Did that keep me from trying to see ALL the things? Not even a little. It just motivated me to binge watch the seasons as quickly as possible.

The best part of social media is that you can find out exactly who else shares your obsessions. I've discovered a rather large tribe of teachers, librarians, and fellow geeks who are similarly Doctorfied. So when my friend Karen from Teen Librarian Toolbox suggested we host a Doctor Who Week on our joint blogs, I knew I was ready to jump in.

Officially, Doctor Who Week starts tomorrow. I wanted to get this post up to make sure you ALL know that...

Don't forget to watch the newest mini episode... and catch up on Paul McGann's Doctor. I loved the Geek Mom Blog's post "Everything You Didn't Know in Night of the Doctor"

Then be sure to watch this one. Tennant is a gem, and
I love this encounter between his Doctor and the Fifth incarnation.


Visit "Doctor Who Central" at Teen Librarian Toolbox for a list of all the TLT posts (from the past as well as this week's offerings).

Check the tag "Doctor Who" here on my blog for all the posts from this special week and the ones I've posted throughout the year. 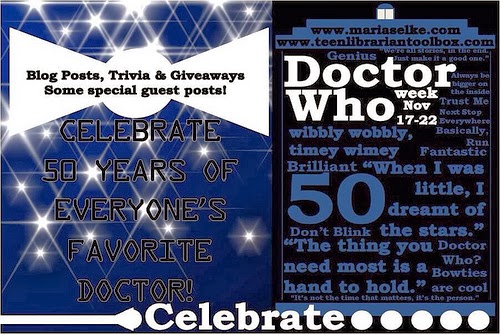