SciFriday review of The Planet Thieves by Dan Krokos

By maria.selke - August 23, 2013
It's been a little while since I posted a SciFriday review - mostly because my summer reading has included a lot of fantasy and trying to wrap up my Newbery reading. The Planet Thieves has been on my "to read" list since it came out in May... so I was excited to get to read it during one of my last lovely days of summer break. 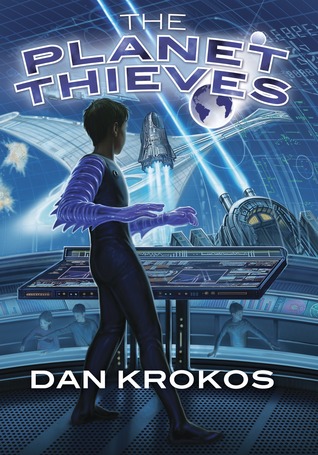 Goodreads Summary:
Two weeks ago, thirteen-year-old Mason Stark and seventeen of his fellow cadets from the Academy for Earth Space Command boarded theSS Egypt. The trip was supposed to be a short routine voyage to log their required spacetime for summer quarter.
But routine goes out the airlock when they’re attacked by the Tremist, an alien race who have been at war with humanity for the last sixty years.
With the captain and crew dead, injured, or taken prisoner, Mason and the cadets are all that’s left to warn the ESC. And soon they find out exactly why the Tremist chose this ship to attack: the Egypt is carrying a weapon that could change the war forever.
Now Mason will have to lead the cadets in a daring assault to take back the ship, rescue the survivors, and recover the weapon. Before there isn’t a war left to fight.


My Thoughts:
It took me a little while to really get rocking into the story. I know that is often the case with science fiction - since the entire world has to be created from scratch. I think it also took me a while to feel like I was invested in the characters. Most of the storytelling was about the battles and action sequences, so the character development wasn't as complete as I would have liked. I really wanted to understand Mason and Merrin's friendship in more depth. He frequently refers to her as his "best friend", but there isn't a lot of development there.

In spite of those drawbacks, this is a story that will really appeal to middle grade science fiction readers. With the coming Ender's Game movie, I think that upper elementary readers are going to be looking for this kind of action-packed military science fiction. Like Ender's Game, the appeal in Planet Thieves is the fact that it is a group of young teens who save the world. They are trained - they are ready - and their courage and initiative will inspire readers.

While the story is told from a male point of view, I was pleased by the matter-of-fact nature of women in command roles. I would have loved to see the group of cadets be more evenly split (at one point the numbers are mentioned, and it is about 2/3 male).

Kids will love the level of action, since it only takes about 20 pages for the main character, Mason, to take charge of events. The story takes place over such a short period, that the pacing feels quick and energetic. The spaceships and battle technology are exciting, and the mystery about Mason's best friend Merrin will keep them guessing.

The Planet Thieves has an ending that is a satisfactory wrap-up for this particular plot yet leaves a lot of room for exploring this world in the rest of the series.

Wonders and What Ifs
How can we make traveling interstellar distances more manageable?
What would life be like on another planet?
Could we get along with an alien race?

Age Range - This is a great one for upper elementary. Lots of action, but never gory.