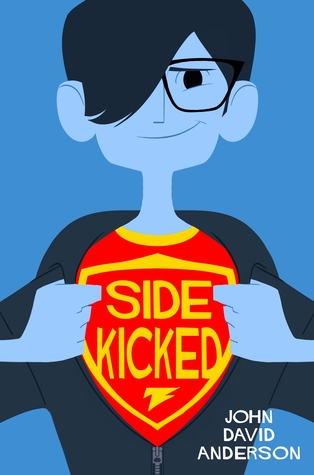 After you read my review, please be sure to jump back to my stop on the official Blog Tour. John David Anderson gives us a humorous look at his Top Ten Innocent Bystanders, and I am hosting a giveaway for a signed hardback copy of the book! Link below.


Goodreads Summary: With not nearly enough power comes way too much responsibility.

Andrew Bean might be a part of H.E.R.O., a secret organization for the training of superhero sidekicks, but that doesn’t mean that life is all leaping tall buildings in single bounds. First, there’s Drew’s power: Possessed of super senses – his hearing, sight, taste, touch, and smell are the most powerful on the planet – he’s literally the most sensitive kid in school. There’s his superhero mentor, a former legend who now spends more time straddling barstools than he does fighting crime. And then there’s his best friend, Jenna – their friendship would be complicated enough if she weren’t able to throw a Volkswagen the length of a city block. Add in trying to keep his sidekick life a secret from everyone, including his parents, and the truth is clear: Middle school is a drag even with superpowers.

But this was all before a supervillain long thought dead returned to Justicia, superheroes began disappearing at an alarming rate, and Drew’s two identities threatened to crash head-on into each other. Drew has always found it pretty easy to separate right from wrong, good from evil. It’s what a superhero does. But what happens when that line starts to break down?

My Thoughts:
There haven't been many books over the last few years that I gleefully devoted precious time to rereading. If you could come to my house and just SEE the enormous stacks of books waiting for me - calling my name in the night - you would totally understand my reluctance to take some of that time and reread something. Sidekicked was a book that was just as amazing, chuckle-inducing, and thought-provoking the second time through. Even though I knew the "twist" in the tale, I enjoyed the chance to see all the little clues jump out at me on a second reading.

For fans of superheroes:
Admit it, you know kids who will rush out to the movies if the lead has super powers, a passion for fighting crime, or a secret lair. I'm right there in the mix, shoving them out of the way so I can get my favorite seat. I bet you know kids who are hooked on comics with spandex-clad teams, too. Sidekicked will appeal to fans of the "supes" genre; devoted and casual alike. The prologue itself will be enough to hook this set of readers, as it sets the stage with a villain soliloquy. The whole story is chock full of "in jokes" and references that will bring a gleam to every fan's eye.

For fans of tongue-in-cheek, snarky humor:
Anderson is a master of sly little commentary. His main character has just the right level of middle school snark to ensure that he would have been one of my favorite friends growing up. Full disclosure - I wore a pin throughout middle school that declared that I "refused to have a battle of wits with an unarmed person". I'm pretty sure Andrew and I would've been best buds.

For those who cheer for the underdogs:
How would you feel to be part of a group of super-powered middle schoolers who can blast electricity, turn their skin to stone, phase through walls, or have super speed? Now imagine how you'd feel if YOUR super power was amazing senses. Poor Andrew is stuck practicing sniffing vials and reading credit cards from extreme distances while his companions steadily move toward being able to defeat villains on their own. I loved how Andrew came to terms with his gifts, and how this story line is a great way for readers to learn to see their talents - no matter what they are - as strengths to be harnessed.

For fans of stories about the awkwardness of middle school and first crushes:
The heart of the story lies in the relationships Andrew has with his teammates. Yes, they have super powers. Yes, they are training to become sidekicks and future superheroes. None of that prevents them from having secrets from their parents, struggling with crushing on good friends, and getting their homework done. The balance in the story was just right, making sure it will appeal to kids who aren't fans of the superhero genre too.


Sidekicked is a great, adventurous read. It has action, humor, and lovable characters. It's a fun read, but it's so much more than that. It's a chance to see the realities of growing up in a different light.
- Even superpowers aren't enough to make middle school easy.
- Moral decisions aren't always black and white --- often they come in shades of grey.
- Comparing yourself to those around you is bound to make you miserable.
- Accept your own strengths and flaws, and learn how to be the best YOU can be.
- Accept that the adults around you aren't perfect either

Age Range: The back of the book says 8-12, and I agree. Though it's probably most appealing for 4th to 7th graders.

*disclaimer* I received an ARC of Sidekicked from Walden Pond Press so I could share my honest thoughts with you here.