Batty About The Colossus Rises - Part 2 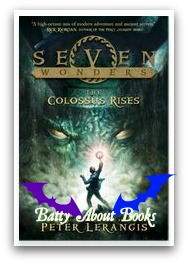 Batty About Books picks up with the second section of

The Colossus Rises
by Peter Lerangis

As always, I host my thoughts (in purple) with Kathy's responses (in blue) here. Kathy's blog - The Brain Lair - is where she posts her thoughts with my responses. Don't miss hopping over there this week, because we had an extended discussion about the Hero's Journey as it relates to this book in her section!

Our earlier chats are here:
Chatting about the cover and previewing
Part One


I still believe this book will be hugely appealing to the middle grade set who adore Percy Jackson and Harry Potter, and I’m enjoying the story, but I think its literary merit isn’t as high as I hoped when I first gazed at the cover... AGREED! I’m not sure it will appeal to Harry Potter fans though unless they are just starting the series and haven’t seen the movies.  I don’t think there’s enough meat to engage those readers. I see it more for readers who like the 39 Clues series. It reads like a compilation of books to me. Yes - that’s exactly it! I can see this one appealing to fans of that series.

Appealing:
Code Breaking
My students adore codes, and following along as the Select figures out each clue along the way will keep them hooked into the story. I plan to give my copy of Mysterious Messages: A History of Codes and Ciphers by Gary L. Blackwood a prominent spot near Colossus Rises in my classroom library. Perhaps it could even lead some students to one of my favorite historical fiction books - Code Talker - about the Navajo in World War II!
Do you think students could figure out the code before Lerangis gives them a jump start? I was a little disappointed with the quickness and ease of it. Though, I didn’t try too hard to figure it out and codebreaker types might spend more time with it before moving ahead with the story. I’m not sure, honestly. Maybe if we’d done some code work before they read it? I can definitely see it leading them toward wanting to learn more about codes. My sons just did a unit with their enrichment teacher on code breaking, and I think that’s partly why my older son enjoyed this book so much.

Kid Team
Kids this age seem to gravitate toward the idea of a team of kids who can outthink and defy adults, especially when those adults have murky motives. They identify with those kids who resent not being given enough information to really know what’s going on. There is something about the tween years (or even beginning earlier for some especially bright youngsters)... They are old enough to start to want to know more than the adults in their lives are willing to tell them. It’s a push and pull time, as I’m learning from personal experience. Watching this group take rather insane risks in order to uncover the truth is something that will call to them.
The number of books I can recall off the top of my head with this trope would lend this statement lots of credence. HIVE, NERDS, The Mysterious Benedict Society to name just three. Though, I feel as if those books have team members who contribute more than their gifts - they have more well-rounded characters. Agreed. I adore Benedict Society, and I know my son loves the NERDS books. I need to read them myself. I’ve only read the Benedict Society myself but my daughter loved HIVE. All three are popular series though NERDS is the most popular in our library.

Super Powers are sweet!
Honestly, do I need to expand on that? Though I found Sidekicked a much better example of the super powered genre, and I can’t wait to share that one with my classroom!

Less appealing (at least to me!)
Character Depth -
I don’t really feel connected to the characters. We’ve gotten a little bit more information about some of them (like Cass’ family), but it still hasn’t made me click with any of them. I’m losing some of my patience in this area. I like action packed stories, but I need to care about the characters in order to stick with a long series. I really want to know what’s up with Torquin, but if we don’t start getting that information soon I may not care as much!
I thought learning more about Cass helped me make a connection too. I also felt like Jack was starting to step up a bit and I was getting to know him too. But, I agree - though I don’t know how much can happen in the last third of the book.  I’m aware that it’s a series, but I need to have a reason to continue with a series.  Way too many books out there and much too little time.

Descriptions -
Sometimes I have trouble visualizing what the author is describing. This really jumped out at me during the spot when Jack comes across the circle with the broken sword in the middle. Why did I notice it here? I puzzled over the description “carved into the circle’s center was a deep, wide hemisphere” (pg 233). Huh? Thankfully there was an illustration on the next page.
We are definitely not only reading the same book, but in very similar ways! I had trouble with that part too - didn’t get the hemisphere. Whenever I hear about a sword stuck inside something, I immediately think King Arthur and picture the sword in the stone. Though that turned out not as accurate as the picture.  I also had trouble picturing the top of the mountain, the tub, and the opening to the cave. I feel as if I’m getting an overview or outline for a story and Lerangis is waiting for the next book to fill us in on the story.

Fun Connections:
I recently read a book called Wild Man Island to preview it as a choice for a survival unit. The plot involves a bit of archeology and geology, and “karst topography” is an important part of that story. (“Karst is a real world that means an area of limestone, sinkholes, underground pools, cenotes” pg. 194) This is the kind of connection I see in books that starts to trigger my desire to develop a unit around a topic. Archeology and geology? What’s not to love?
As a school librarian my brain constantly tries to make connections between books for displays and literature circles and book clubs. But archeology and geology forming the basis of a survival unit? I need you at my school. *grins* The premise of Wild Man Island is that the boy is in Alaska where his archeologist father died seeking caves of early man.

Pop Culture References:
Will the kids get these? Maybe... maybe not. Aly is a constant source of little tidbits that make me smile, though. My favorite in this section is her throwaway line “It’s only a flesh wound” pg 201. I can imagine that some kids in upper elementary may have watched Holy Grail with their parents... but most won’t have seen it. So did the author put this in for his own amusement? It makes me smile to think that is the case. I do think that the way Peter has Aly reference classic movies could get kids to want to check them out. At least, I can absolutely see my student population doing this.
I admit it makes ME want to watch these movies but my athletic- and/or video-game- inclined population would not make the effort.  Or at least very few of them would.  I can see many of them skipping right over the references or just asking a parent, then moving on with no further thought.  I would fall on the floor if I heard of any of them going to watch any of these movies. Sadly. My students will notice these things, and I absolutely can see it leading them to some of these movies or references. My kids love connections.

Is the water magic? Does that tip the book into the fantasy side of the Speculative Fiction family? While the kids supposedly have special powers because of their genetic variation, there hasn’t been much science in the book so far...
Again I wonder if Lerangis is looking at the series as a whole and waiting to develop things. Which would be a mistake because I won’t be able to stick with the series.  This seems like it will be science fantasy, with soft science and mixing in fantasy elements of magic.  The science in this case based around the myth of Atlanta and the powers The Select.

Current Verdict (2/3 of the way in)-
Kids will love this book, but unless the pace picks up, and I find myself caring about the characters more, I don’t think I’ll be in it for the long haul. Me neither, though I think the only kids that will be interested at my school will be the younger 6th graders. This melds well with my idea that my students will enjoy it. I expect it to appeal to my third and fourth grade readers.
Batty About Books Fantasy Science Fiction