Welcome back to another edition of Sci Friday! Today's review was a rather serendipitous find. I wasn't honestly looking for anything at the library, and Freakling was just sitting on the top of the bookcase, calling my name! I'm always on the lookout for a middle grade science fiction read, so I'm not sure how I missed seeing this when it came out. 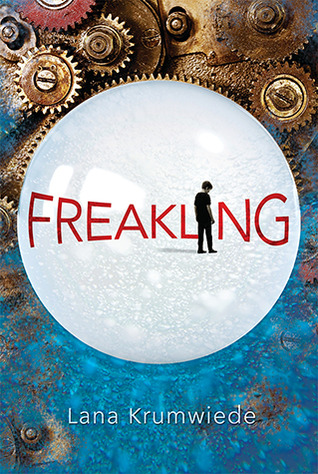 Goodreads Summary:      In twelve-year-old Taemon’s city, everyone has a power called psi—the ability to move and manipulate objects with their minds. When Taemon loses his psi in a traumatic accident, he must hide his lack of power by any means possible. But a humiliating incident at a sports tournament exposes his disability, and Taemon is exiled to the powerless colony.
The "dud farm" is not what Taemon expected, though: people are kind and open, and they actually seem to enjoy using their hands to work and play and even comfort their children. Taemon adjusts to his new life quickly, making friends and finding unconditional acceptance.     But gradually he discovers that for all its openness, there are mysteries at the colony, too—dangerous secrets that would give unchecked power to psi wielders if discovered.

My Thoughts:
Often a book like this takes a while to suck me in. World building can take some time, which is one of the few downsides to science fiction and fantasy. If a reader isn't patient enough to "get" the world, they may not see the appeal. Freakling, though, had me from the first sentence... "The first time Taemon's brother tried to kill him was the night Uncle Fierre came over with his unisphere". The structure of the book was also appealing, with each chapter starting with a poem from the "calendar song" - a horoscope like system from Taemon's world.

I enjoyed "Cain and Abel" conflict between the brothers, even though each of them was just a little too much. Taemon's brother, Yens, was so power hungry, so driven to have it all, that he didn't seem quite real. Yet I think this is the way that kids of this age see others. They are still learning to see the shades of grey, and so I think Yens will make sense to them. Likewise, some of the morals being taught along the way seemed overemphasized to my adult mind, but it never felt preachy.

Like what happened as I read The False Prince, I guessed most of the big "reveals" before they happened... but once again I found that satisfying. There were enough pieces of foreshadowing to lead me in the right direction, without feeling cheated or tricked. Instead, I felt triumphant. I think kids enjoy that feeling, too. It makes them feel like they are figuring things out along with the character instead of just being told what happens.

The story moved along at a quick pace, filled with plenty of action and adventure to appeal to middle grade readers.

Wonders and What Ifs:
How would the world be different if everyone was expected to have "super powers"?
What special powers might be lurking in our minds - in the parts of the brain we don't understand?
What are the dangers of having too much power and too much knowledge?
What kinds of sports would be played in a world with "super powers"?

Main Character: We see the story from the perspective of Taemon, a preteen boy. There are some girls who become important in the plot later on, but Taemon will easily appeal to all readers.

Age Range: This is definitely a middle grade book. I won't hesitate to put it on my elementary classroom shelf, but it would also appeal into the middle school age range.

I'm participating in the March Slice of Life Challenge, hosted by the amazing educators at Two Writing Teachers. Stop by to see what others are posting!

Also - if you stop by and comment, and you are also slicing - PLEASE feel free to include your URL in the comments. With over 200 people slicing, it is often hard to go find your specific link on the Two Writing Teachers page, and I'd love to come read YOUR slice too!
Middle Grades Science Fiction SciFriday