Wednesdays is all about nonfiction over at Kid Lit Frenzy. While she focuses on picture books, I'm going to stretch the rules a little bit and slip a graphic novel your way. 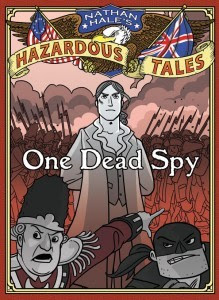 Hardcover, 128 pages
Published August 1st 2012 by Harry N. Abrams
ISBN141970396X (ISBN13: 9781419703966)
Goodreads Summary: Nathan Hale, the author’s historical namesake, was America’s first spy, a Revolutionary War hero who famously said “I only regret that I have but one life to lose for my country” before being hanged by the British. In the Nathan Hale’s Hazardous Tales series, author Nathan Hale channels his namesake to present history’s roughest, toughest, and craziest stories in the graphic novel format.

One Dead Spy tackles the story of Hale himself, who was an officer and spy for the American rebels during the Revolutionary War. Author Hale highlights the unusual, gruesome, and just plain unbelievable truth of historical Nathan Hale—from his early unlucky days at Yale to his later unlucky days as an officer—and America during the Revolutionary War.
My thoughts:
Wow! This is exactly how history should be taught. The structure of the tale itself lends both power and humor to the story Nathan tells. Nathan Hale stands at the gallows, sharing his story with the hangman. From the first image - the hangman himself whistling on his way to work - you can tell that this will not be a dry history textbook.

Nathan Hale's famous "last words"? He concocts them while chatting with the hangman about what, exactly, his last phrase should be. I was already laughing, and hooked. Then a huge book of American History appears out of nowhere and sucks Nathan in. When he reappears, he is able to share his own experiences in the American Revolution as well as many other details he wouldn't know otherwise. It seems like a silly plot device, but it really works.

The story cycles back and forth. We hear the conversation of Nathan, the hangman, and a British provost. Then we jump into the battles in Massachusetts and New York. We hear about the transport of the "guns of Fort Ticonderoga", complete with the amusing character of Henry Knox. While the story ends with Nathan caught spying, he can reveal the real ending to the provost and hangman. "We Win".

Even better?
- I found myself filled with questions about the pieces of history mentioned in passing throughout. What exactly was the "First big fire" of New York City? What was Knox really like?
- The back of the book includes some fun features.
- biographical information about the main historical players.
- a short story of Crispus Attucks and the Boston Massacre (including information about how the incident was "played up" and propagandized to build support).
- a clever bibliography (done as a short comic) and discussion from "Correction Baby" about some of the poetic license taken in the story. Loved this! 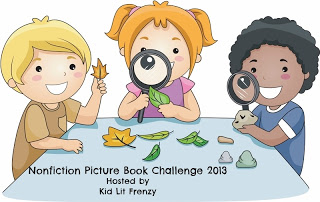