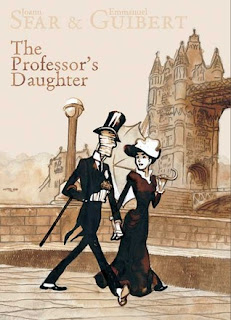 I was in the library last weekend, standing by the graphic novel section. My son and I were searching for Ghostopolis, by TenNepal. A young lady (probably early teens) was also there. Her arms were filled with manga and graphic novels, and she was continuing to browse and check out titles.

She noticed that we were looking, and offered to help. Once I found the first title, she and I both went back to browsing the shelves. I smiled as I removed one book after another from the shelf, considered it, and replaced it. I have a huge pile at home already (including several graphic novels), and I really didn't need to add more to the list.

A few moments later, she handed me a book.

"I think you'd like this," was all she said. I smiled, thanked her, and bumped it to the top of my reading pile. When someone takes the time to hand you a book - you read it. Period.

Paperback, 80 pages
Published April 17th 2007 by First Second (first published 1997)
ISBN 159643130X (ISBN13: 9781596431300)
edition language English
original title La fille du professeur
literary awards Prix du Festival d'Angoulême for Prix René Goscinny (1998)
Goodreads Summary: Imhotep IV is an Egyptian mummy who's just opened his eyes for the first time in 3,000 years. Lillian Bowell is the daughter of a renowned Egyptologist. One day, when the Professor's away, the two go out for an afternoon on the town. The heap of trouble that they land in--brought on by Mozart, afternoon tea, and a passing gentleman's sensitive nature--only deepens when they learn Imhotep IV's father is in town. Can Imhotep IV and Lillian stay together when both their fathers, the London Police, and even the Archeological society are desperate to drag them apart?

Reading this graphic novel was a trippy experience. It's not often one of the protagonists AND the antagonist are fully wrapped mummies wandering around Victorian London. Lillian becomes the beloved of two ancient pharaohs, and the black comedy ensues.

The story begins with no back story or explanation. It is a little disorienting, but I quickly got the feel for what was happening and started to smile and chuckle at the dark humor of it all. Imhotep IV gets drunk with a sip of tea, creating a riotous start to the tale. There are accidental poisonings, ghostly hauntings, kidnapping, and even the Queen gets into the act. Hundreds of mummies are confiscated and examined to try to locate the culprit mummy, and no one seems the slightest bit surprised to have in depth discussions with men wrapped in gauze.

While relatively short for a graphic novel, the plot kept me hooked the whole way through. The pacing was excellent. The relaxed and breezy beginning as they strolled hand in hand gave way to an increasingly faster pace as the deaths, kidnappings, and escapes continued. A high point in the hilarity was seeing the Queen yanked over her desk by a mummy and carted through the streets of London under his arm.

The art is lovely, with a muted sepia toned color palette. Some scenes, like Imhotep IV chatting with his ghostly children, are emphasized with splashes of blue or green.

I wish I could find that teen and thank her for sharing her recommendation with me. It is an implausible, crazy plot, but it works. The twisted ending was the perfect way to wrap up this comedy of murder and mayhem.