Welcome back to Sci Friday! This week I offer up an unusual book about a fascinating physicist. 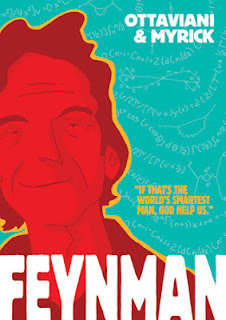 Richard Feynman: physicist . . . Nobel winner . . . bestselling author . . . safe-cracker. In this substantial graphic novel biography, First Second presents the larger-than-life exploits of Nobel-winning quantum physicist, adventurer, musician, world-class raconteur, and one of the greatest minds of the twentieth century: Richard Feynman. Written by nonfiction comics mainstay Jim Ottaviani and brilliantly illustrated by First Second author Leland Myrick, Feynman tells the story of the great man’s life from his childhood in Long Island to his work on the Manhattan Project and the Challenger disaster. Ottaviani tackles the bad with the good, leaving the reader delighted by Feynman’s exuberant life and staggered at the loss humanity suffered with his death. Anyone who ever wanted to know more about Richard P. Feynman, quantum electrodynamics, the fine art of the bongo drums, the outrageously obscure nation of Tuva, or the development and popularization of the field of physics in the United States need look no further than this rich and joyful work.
One of School Library Journal’s Best Adult Books 4 Teens titles of 2011 One of Horn Book’s Best Nonfiction Books of 2011


The Audience:
High school students with some knowledge of, and interest in, physics will love this book. Feynman's antics sometimes ventured into more mature content. He frequented a topless bar during one stretch of his career, and while the graphic novel handles this fairly tactfully, I wouldn't hand the book to younger teens.


The Challenging:
My knowledge of the specifics of physical laws are limited to what I can easily explain to elementary school students. I used to know at least a little more than that, but my last physics classes wrapped up many years ago. Even so, Feynman is able to explain many of this famous theories using simple language and images that helped me understand at least the big picture.

Another difficult aspect is the organization of the book, which uses flashbacks frequently and doesn't chunk into chapters. The color scheme in the panels helps the reader keep track of when we jump into the past, but students who are unfamiliar with this convention may need some guidance to help them understand the timeline of the story.


The Amazing:
Feynman was a fascinating man. Setting his life as a graphic novel makes it more accessible to many high school students who might otherwise never attempt to learn more about him. We get a glimpse of his quirky humor, slightly bizarre personality and unconventional approach to unraveling the mysteries of the universe.

So often we see scientists as stuffy men in lab coats, even when they are unique and sometimes strange individuals. This book allows us to see Feynman as a brother, prodding his younger sister to take up science in a time when women were actively discouraged from such pursuits. We see him as a husband, devoted in his own way to a woman whose illness means they will be parted way too soon.

Overall, we see him as a man fascinated by the beauty and mystery of our world. He is driven to explain how things work, but is able to accept that some of the "whys" may be beyond our knowledge - for now. What a wonderful way to ignite the curiosity of a new generation of scientists.