Batty about Seraphina - The Finale 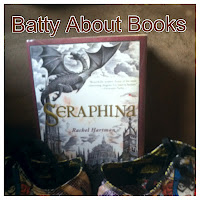 Welcome back for the final installment of our discussion. Kathy (aka @thebrainlair) will have her post go up later. She's been working on book clubs with her students... and I hope we get to hear all about that!

Check out the other two posts on this book, then dive in!
Part One
Part Two

The Ending (for now... I have heard the sequel is in the works!):

I have a bit of a confession to make - I couldn’t stop myself reading long enough to take notes on this section. So there won’t be as many direct quotes and page numbers on this entry. Tsk, tsk on me (I’m currently embroiled in teaching my fifth grade reading group how to take some notes as they read so THEY can use direct quotes and references, too!)

Why couldn’t I take notes? It was directly related to the fact that this section was just so darned good! It was just as beautifully written as the other portions, but I got caught up in the action and wanted to know how it all turns out!

My biggest concern with my post today is deciding how much to give away about the plot. I know several people who read the blog are interested in reading the book, and some have already read it. While there are studies that show that the pleasure we get from a book or movie isn’t destroyed by spoilers, I don’t want to be the one who messes up a book for you!

Okay, enough explanations and hand-wringing - it’s time to get the discussion going!

Seraphina’s Father:
We’ve discussed in previous posts how interesting it is that the mother who is dead has a larger presence and influence in the book than the father who is still living. This section didn’t give us a lot more about her father, but it did help me sympathize with him. It humanized him - helping me see a man who was heartbroken by the fact that the woman he loved didn’t trust him enough to share her truth with him. I was really pleased to read these scenes, and I hope that we get more insights into her father in any sequels. I think I like him now.
Kathy: And yet we still only get to know a hint of him, and like Seraphina, I wonder if he really said those things or did we just want to hear them.  I liked the message but then he was gone when Seraphina woke up and Stepmom didn’t even know she was there. Is he really past hiding?


Let there be love:  “Love is not a disease” (432)
Yes, there is a love story. Again, I’m trying not to spoil it all here. Sometimes, when the main character has growing fascination and attraction, I just cringe. Especially when her love interest is just not worthy of her, and that stinks. Sometimes, the angst makes me feel mildly ill. (Yes, I know many people swooned over Shatter Me, but that was one where I felt the angst was just over the top). Seraphina, though, felt right. She’s experiencing a growing attraction that feels like it is turning into love- and the pacing makes it feel realistic. She is concerned about her honor, too, but it doesn’t become a whimpering whining mess. The resolution of this particular part of the storyline is probably my least favorite part of the book, though. I’m just filled with anxiety for her....
Kathy: Why is it your least favorite? I thought the reality of their choices made the book more beautiful and believable. We all have obligations that mean we can’t pursue certain avenues. I’m glad Hartman introduces the many levels of love. All of which are valid. Orma sums it up nicely earlier in that scene: “I was happy, ...then I was grateful. And the sun shone, and I felt sad...” That page was so powerful. On the other hand, I do fear for Seraphina. It helps that she has a quest, but the title of book 2, Drachomachia, suggests hard time are coming for everyone. (Okay - trying not to spoil.) I wasn’t upset with the way the romance moved, but I just worry about her. Least favorite part because I know how so many other things resolved, but this one is still hanging. I absolutely agree with you about the reality of it, and the power that holds.


Lady Power.
I was going to say “girl power” - but these women are far from being just girls, right? I know Seraphina is often unsure of herself, but I admire how she keeps trying to find a way to be as honest and true to herself as she can be. She pursues her music, stands up for her friends, and even tells royalty her opinions without any real fear.

Linn’s memories make me feel like she was also a strong and confident woman (dragon). Again, sometimes love stories make it feel like all the strength a woman has is to give up everything for her love. Yes, Linn did this, but I don’t get the feeling that it was the only way she expressed her individuality. From the scenes we saw of Linn with her father, I think this was true.
Kathy: Viridius’ memories of Linn also point to her strength. He mentions the way she carried herself, never really giving up her dragon-side to be saarantris. I like that both Claude and Lucian are attracted to strong women who can continue being themselves.  I know it seems that Linn gave up everything, but ultimately that made it possible for Seraphina and Orma to have a stronger relationship. His commitment to Linn led him to being “more father to [Seraphina] than [her] own father...” (432). I don’t think that would have been possible under any other circumstance. My hope is that Linn’s strength and memories will help Seraphina truly accept all parts of herself.


The Mysterious Hidden Dragon:
See, here is where I don’t want to give any spoilers. I will say that I loved how this played out. I generally pride myself on having at least a sense of where a plot line like this is going. Looking back, I totally should have seen the clues. That’s the best resolution, in my mind. An answer to a puzzle that I didn’t figure out on the way through, but that really does make good sense when I find out the answer. I’m not sure why I didn’t pick up on the clues. Partly it was the fact that the red herrings were well placed. Partly it was the fact that there was so much going on that I didn’t dwell on that aspect of the story. Either way, I was definitely pleased with the resolution to this piece of the story.
Kathy: That was wonderful, right? Though I hope it’s explored a bit more in the next book. I would be interested in hearing more of their past. I’m happy about this development also. I wanted to go back and see how I missed it. Twice.

This was an amazing book. We definitely picked a winner this time, Kathy! I’m so glad I made the time to read this one.

To put it simply - this book should be on your list if you like young adult fantasy. I can't wait to see what we get next from Rachel Hartman.