This week I’m focusing on two amazing graphic novel titles that were released this year – Earthling! by Mark Fearing and Legends of Zita the Spacegirl by Ben Hatke. Both books would tie in well with any study of space, though they also include strong positive messages about friendship and heroism.
Earthling! – Written and Illustrated by Mark Fearing 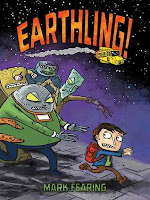 Every kid worries about making friends at a new school, but when nine-year-old Bud accidentally catches the wrong bus and finds himselflaunched into deep space, new friends are the least of his problems! At Cosmos Academy, Bud learns that Earthlings are the most feared creatures in the galaxy, and even Earth's location has been hidden! With the help of his newfriend, Gort, Bud goes undercover as a Tenarian exchange student. Unfortunately that means everyone thinks he's a pro at anti-gravity Zero-Ball (even though he's really only a pro at watching sports). And with paranoid Principal Lepton threatening to expel any Earthlings (into outer space) and only Gort's hacked Blip computer to help them determine Earth's co-ordinates, will Bud ever find his way home?

Earthling! was an adventurous, exciting tale. Kids will be able to identify with Bud and Gort as they become friends, deal with bullies, and handle the stress of a big competition. The story also gets a huge goldstar in my book for the matter-of-fact way in which Gort’s parents are presented. His mom is the mechanical tinkerer, working on the engines of small space ships. His father is first seen fixing dinner in the kitchen.
Science Tie-ins:

The science earns Earthling! another gold star. Physics and space concepts abound in the story. Most of them are just mentioned or shown in illustrations, and would be a perfect springboard into a study of the universe. Some of the many concepts mentioned in the story are the radio astronomy, black holes (and super massive black holes!), planck units, meteors, dark matter, wormholes, singularities, and “molecules in absolute zero” (pg 88). While some of these may not be depicted completely accurately, I can absolutely see it leading to students wanting to dive in and learn more. (Check out last week’s SciFriday for two nonfiction books that would fit very well with this story.)

Wonders and What Ifs:

How would it feel to move about in low or no gravity?

What kinds of games would you create for a low gravityenvironment? Legends of Zita the Spacegirl by Ben Hatke

Goodreads Summary:
Ben Hatke brings back our intrepid space heroine for another delightful sci-fi/fantasy adventure. Zita is determined to find her way home to earth, following the events of the first book. But things are never simple, and certainly never easy, in space.
Zita's exploits from her first adventure have made her an intergalactic megastar! But she's about to find out that fame doesn't come without a price. And who can you trust when your true self is being eclipsed by your public persona, and you've got a robot doppelganger wreaking havoc . . . while wearing your face?
Still, if anyone can find their way through this intractable mess of mistaken identity and alien invaders, it's the indomitable Zita, inLegends of Zita the Spacegirl.
What I thought: I adore Zita, and this second installment of her story is even better than the first. The storyline is easy to follow, but is still rich with possible discussions. What makes someone a hero? Do we want to be like our heroes, or have our heroes be like us? Zita is frustrated, because she wants to throw in the towel on her hero gig. It reminded me of so many heroes from harder stories who struggle with this same idea – like Frodo in Lord of the Rings.
The art is amazingly bright and colorful. I love how the different creatures are drawn. Not only is it fun, but the art brings in some visual puns as well, and helps make the high level vocabulary more accessible. Zita is a perfect example of how the comic book format can help grow a reader's vocabulary and critical thinking skills.
Science Tie-Ins:
This story is a lighter story, with less specific detail about science built in. It still shows space travel and alien life forms of multiple body types. There are cool inventions - like the way that Mouse speaks - that could spark interest in creative inventions.

Wonders and What Ifs:
Many of the question ideas I considered tied into the idea of heroism.
Can you learn to be a hero?
When can you consider your "job" done? What is each person's responsibility in helping others?
What might alien life look like? Could creatures we already know be more intelligent than we think?

BONUS FEATURE!
I’m linking to some cool science news items that have popped into my feed this past week. Enjoy!

"IBM Scientists take image of atomic bonds" While the full article is behind a paywall, this one describes the study a little bit and shows one of the amazing pictures.

"Organs tailor made with body's own cells" A bit creepy, but this could be the start of a medical breakthrough. Science fiction meet science fact.

"Eye of the Storm resources" - This is Kate Messner's Pinterest site with resources to go along with the weather information from her novel. If you haven't read it, Eye of the Storm is a wonderful mid grade "near future" science fiction.

"Dry Ice Snowflakes - on Mars" Carbon Dioxide snow... how cool is that?

"Jupiter gets rocked by an impact" - One of my favorite astronomers - Phil Plait - explains what happened and has VIDEO of the event. Sweet!


For those of you just jumping into my stream, I love science fiction. Whenever someone asked me to recommend a book, though, I kept going back to some old classic titles. In an effort to update my “go to” list, I spent the summer trying to read as many newer science fiction titles as possible. I wrote about my discoveries under the tag SciFiSummer. Of course, once summer was over I was stuck. I needed a new fun tag, right? Thus was born SciFriday.
Current Events Graphic Novels Science Science Fiction SciFriday