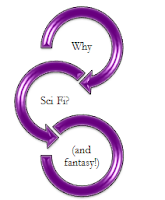 I’m looking forward to the lazy days of summer.

I’ll be sleeping in – at least as much as my young sons will allow. I’ll be honing my writing craft – participating in the #TeachersWrite virtual writing camp hosted by Kate Messner.  I’ll also be participating in the first ever SciFi Summer event! Okay, so that last little bit is entirely self-created, but just as important. I’m determined to locate, read, and write about some excellent science fiction that has been published in the past 10-15 years.

Before I dive into that challenge, though, I wanted to put in my plug for some of my favorite “old school” novels that I highly recommend. You don’t HAVE to read them…. (Okay, yes, you do.)

Madeleine L’Engle was one of my introductions into science fiction, and her books are helping me give my own sons an entry point into the genre. I love how she folds together science, fantasy, and the struggles children face in growing up and trying to discover who they are.

A Wrinkle in Time is a classic. Written in 1962, and receiving the Newbery award in 1963, this book should be on every aspiring science fiction reader’s “to do” list. L’Engle tells the story of three children who set out to rescue their father who has gotten lost after attempting to “wrinkle” space. I love the fact that both the mother and father are scientific professionals, and that many gender stereotypes are tossed aside.

A Wind in the Door continues the story of the Murry family, but folds in more biological science. Spark an interest in cellular biology while giving readers a chance to think about the power of truly understanding each individual.

A Swiftly Tilting Planet is the trickiest read of the trio. The threat of nuclear disaster looms over the Murry family; and the rest of the world. Saving the universe will require time travel, going back and changing things a little at a time to push history into the direction of a more positive “might have been”. As time travel is often a staple in science fiction, this would be a great addition to any science fiction diet.

Orson Scott Card is another “go to” author for science fiction. His range starts in young adult, but his topics and themes stretch up into adulthood. While there is often violence, it is generally handled carefully.

Ender’s Game. I always recommend this to my students as they head out to middle school. Gifted youngsters are selected to join Battle School, preparing them to help humanity fight off an alien menace. It’s an action packed book, but a great one for beginning to think about the universe. The later books in the series are exceptionally rich, opening eyes to a broader world (okay, universe) view.

There is even a companion series that starts with a book called Ender’s Shadow that tells the same starting tale from another point of view.  This one is a bit grittier (especially at the beginning) as the main character – Bean- starts his life as a small child living on the streets.

As you dive into science fiction, remember there is a reason that the timeless classics have been revered for so long. Most of these books were written for adults, so would be best for high school and up. (Of course, every reader is different, so some students may be ready earlier or later than others.) Grab a few titles from these masters:

Mary Shelley – Yes, Frankenstein is considered one of the first true science fiction tales. Using science to create new life… what could go wrong? An excellent exploration of what it means to be human, and how our desire to be godlike must be done cautiously.

Isaac Asimov – Asimov was not only a science fiction writer, he also wrote books explaining scientific concepts. As such, he had a fabulous grasp on the scientific concepts he built into his short stories and novels. I remember reading the Foundation series in high school, and I need to put that on my rereading short list. I just purchased a copy of I, Robot to reread. Asimov was key in turning the tide away from “robots = scary and evil” to helping us consider the many ways robots could enhance our modern way of life.

Carl Sagan – I adored Contact and have read it many times over the years. Yes, it was a movie. Don’t do that to yourself. Read the book. Experience the glory of mathematical and scientific inquiry as we encounter an alien species for the first time. You  don’t have to be a scientist to enjoy this one.

Frank Herbert –Dune. I devoured this series in high school. It is complex, and not for the faint of heart; probably not a starter science fiction series. Yet for students who are learning to critique the governments of our world, it is so valuable. Taking a step back and analyzing fictional worlds and governments arms us with the tools we need to look at our own. The worlds and cultures Herbert creates are diverse and majestic. I think I just talked myself into making the time to reread it soon myself.

Ray Bradbury – You can’t go wrong with Fahrenheit 451. A tale of censorship in the future – 451 degrees is the temperature at which books will burn. My “Batty About Books” buddy and I will be giving this one a quick reread once we are done Dragon Castle and I’ll report on it. It’s been many, many years since I read this classic.

If you’d like to learn a bit more about some of these authors, check out the Science Channel’s series, Prophets of Science Fiction.
http://science.discovery.com/tv/prophets-of-science-fiction/

What did I miss? Have any other suggestions of classic science fiction that you’d like to suggest?
SciFiSummer Why Sci Fi?