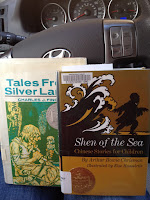 I’m on a roll, powering through these early Newbery books like crazy! This week I’m reporting on another two books completed. At this rate, I could finish all 90 in one year - but I am taking the "stress free" portion of the challenge seriously.

Tales from Silver Lands by Charles J. Finger
This was my favorite of the two. While the stories were quite wordy, they were also filled with beautiful language. The tales were written as if they were being told around a fire, which took a little bit of getting used to. Once I was in the groove, though, I found the style endearing. It reminded me of the recent style of storytelling like Lemony Snickett. The stories were filled with poorly chosen wishes, magical objects, giants, heroes, and tricksters. I could easily see using these stories in a classroom setting.

Shen of the Sea by Arthur Bowie Chrisman
I’ll be honest; I didn’t really enjoy this one at all. Thankfully, it was short. The tales felt abrupt, dropping off or picking up mid-event and stopping before I felt like they were over. The lessons seemed inconsistent from one story to another – with hard work rewarded in one tale and punished in another. I had trouble keeping the characters straight, and I never really cared about any of them. Again, I’m thankful this was a short one.